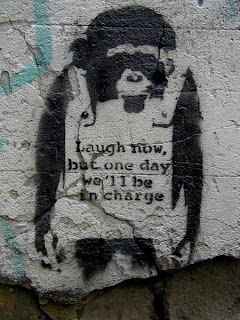 Banksy, "Laugh now, but one day we'll be in charge"

Is the war over? Are there still starving kids out there? Maybe our views are too fucken narrow; maybe, we have been living in a fantasy world where the comments and convictions we make no longer have any meaning, but who knows, maybe I'm wrong.

I think we need to open the picture up. First of all, we have been communicating with graffiti from the beginning of time. It was not dead for the cave painters, the Egyptians, or the French revolution -- the birthplace of the stencil. However unfortunate it may be that "suits" have taken a hold of graffiti's marketable quality, the power of real graffiti has not diminished. I am moved every time I see a Swoon or a Banksy in a public space and cannot imagine that the intentions of the artists were for Urban Outfitters to get a hold of their influence. This is a huge concern and a problem not just for graffiti artists, but also for all alternative lifestyles. On the other hand, good graffiti has a message, and so, if the art receives attention, then more people will be exposed to the message.

Sterile surroundings provoke ideas of change in highly motivated kids. When people believe in what they are doing enough, they disregard their own safety and well being in order to benefit others. This is an ever-evolving energy that does not make sense to the corporate world, and thus, is something the corporate man will never obtain. All they do is ape the idea of graffiti without understanding exactly what graffiti really is. For example, a Rambo poster is not graffiti, no matter how hard Hollywood tries to make us think it is. It is waiting to become graffiti though, but that can only happen at the hands of artists.

The untrained person that encounters the Rambo poster that Cory Oberndorfer referenced in his review "Graf is Dead" on this blog might consider the poster to be graffiti, but then again, that same person might be wearing a graffiti-inspired t-shirt from Urban Outfitters. The poster lacks the convictions of an artist.

I would like to take a minute to question the nature of graffiti -- an art that constantly comments on its environment. With that said, do you think with an ever changing world there will be ever changing questions? In addition, yes, the suits will get a hold of that freedom that makes graffiti what it is, but this is only a cheap imitation, and it can never be authentic. This is the cycle, and the fact that it's becoming commercialized I think will only make this cult stronger. So how can the innovators die? The market needs graffiti and graffiti needs the market.

A world that has become desensitized to television, commercial stores like Urban Outfitters, and the ever-growing leeches of the marketing world. The corporate will always be trying to suck the marrow out of the honest nature of graffiti, but advertising could never possess the qualities this art has. Advertising will never be graffiti. The nature of the beast is never ending, and graffiti just keeps pushing on. As time has gone on, graffiti has just reinvented itself to stay ahead of the market. The language has only become more elaborate and sophisticated. Naïve people will always interpret advertising as graffiti, and it is job as the public writers to educate them so we do not get confused.

The exposure graffiti has received has spread worldwide awareness through the work. Graffiti is a virus of potent information and there will never be a cure for it.
at 11:09 PM