Botero at the Katzen 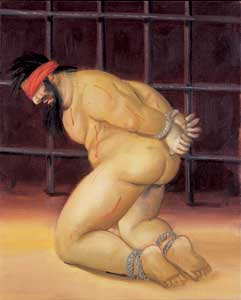 This past winter vacation I was a guard at the Katzen Museum where Fernando Botero's Abu Ghraib painting/drawing collection was being shown. At first glance I felt the need to shed light on a subject as gruesome and venomous as torture but then I was left with the question of "by whom?" Who has the authorship on this subject? The subject being paintings depicting "Uncompromising graphic images by this Colombian painter express his outrage at the American-led torture of Iraqi insurgents" (this quote taken from the Katzen Museum's website).

This is where you can say problems start for this work. "Painter expresses outrage," but the paintings are not depictions of real events, they are expressions of when "Botero constructed each work after reading official reports of the atrocities and concentrated on the suffering and dignity of the victims rather than their tormentors." I am not sure if anyone has the authority to show those paintings with conviction without looking like a phony.

In no way am I disqualifying the tortures that the American led soldier did to the Iraqi insurgents, but I am worried about a painter who thinks that reading something in a newspaper means that they have a voice in what happened, and I am worried about who hears that voice. Putting America down is a clear and manifested gravy train that started when America started. So Botero is not winning any races there, he just spins it to ultra violence, which is a shame because the paintings' tour of the country won't be visiting any veteran hospital, but they will be touring art museums and colleges alike. This gives the painting tour the benefit that its audience will be well-knowing and well-receiving of the work. This makes it function as an account of Army monstrosity to faceless victims which has already been made a very popular subject. Usually when covering that subject the artist or creator has some correlation to the particular monstrosity other than reading about it in the news.

When 911 happened I remember the resurgence of patriotic items for sale. Botero's Abu Ghraib functions on that level of shameful manipulation as well, but it functions humorously to the people who didn’t buy the American flag bumper stickers.
at 12:01 AM