Internationally recognized print artist and founder of Pyramid Atlantic, Helen Frederick, has hand-selected more than thirty of the area's most accomplished print artists to present their unique works at affordable prices- just in time for the holiday season!

Prints are available both framed and unframed. In addition, various other printed cards will be available for sale. 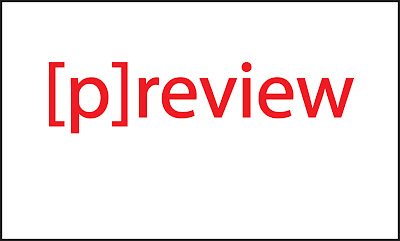 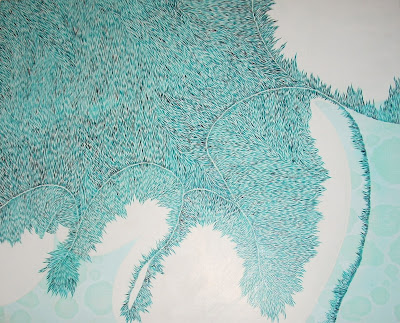 With more than 40 artists exhibiting, MICA has chosen to break this year’s MFA Exhibition into three separate shows highlighting approx. 15 artists each group for a period of two weeks. Last Friday’s opening brought excitement and relief as many students could see the light at the end of their graduate study tunnel. One artist in particular, Jin Young Kang, commented that the MFA journey was well worth the effort. Her work, inspired by natural landscapes, has a strong emphasis on obsessive marks and geometric shapes; it was well reviewed by all those in attendance. All of her works display a well-balanced set of color, shape and space. Her attention to detail is critical in evoking her determined sense of self. Kang began as a painting/drawing student at the School of the Art Institute of Chicago and will complete her MFA from the Mount Royal School of Art this spring. 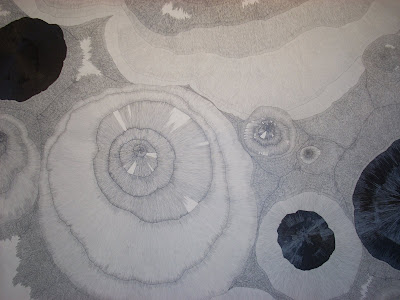 Eric Beltz creates “high-definition” allegorical drawings of Founding Fathers, colonists, flannel clad lumberjacks felled in piles of wood, skull headed pioneers, and poisonous plant life. At first look, one is absorbed by his astonishingly sophisticated drafting skills. As looking continues the viewer is drawn in by a complicated web of symbols, historical references, and text. Violence, natural destruction, and psychedelic aspects are entertaining, but as the reading continues one realizes that the artist’s engagement with history and the American origin myth is deep and much more subtle, this is not a cheap formal or pictorial thrill.
To Eric Beltz, the Founding Fathers are intensely conflicted but contemplative, bare-footedly engaged in the natural world, it’s plant lore, it’s natural bounty, but also bent on harvesting and chopping it to increase their personal wealth. They have a desire for equity and justice. 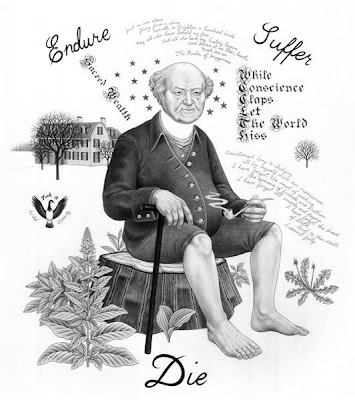 In “Fuck It,” John Adam’s is quoted, “While conscience claps let the world hiss,” but all of the founders’ honor and goodness is directly attached to their moral failings and compromises. Floating heads represent this separation of thought and action. The pieces in Pulse are riddled with text and symbolism that addresses this contradiction. In “The Good Land” Beltz states, “To learn something and to practice it.”
Beltz’s references are wide-ranging, from the King James Bible, The Tibetan Book of the Dead, and the writings of early Americans. His handling of graphite is sophisticated, analytical and one cannot help but think of Grant Wood at the same time 18th and 19th century etching. This analytical approach as well as his well rounded understanding of Plant-lore and American History allows us to believe his allegory. As a result, we also discover the believability of his critique and its relationship to present day conundrums. 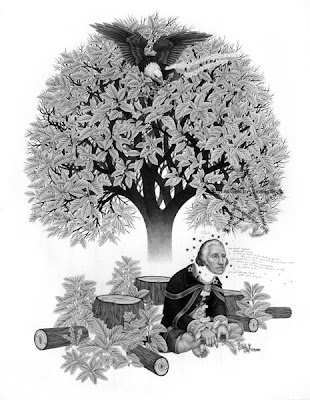 Tree of the Evil Eagle

The Artist’s criticism reveals the flaws that are built into the American origin myth. Specifically, the Founding Fathers’ connection to generational problems in race relations, identity, and Beltz seems to suggest the natural world. The work would fall short if the questions stopped here. His work challenges the viewer to re-navigate, and clarify the American past as a way of actually dealing with the aforementioned reoccurring problems we face. Where some critics view Beltz’s angle as a grisly/macabre perspective of the Founders, I perceive some subtle reverence. 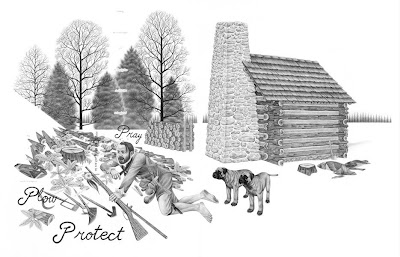 He does harbor romantic notions about these figures and undoubtedly believes that there are some saving graces built into the idea of our republic. This is of course evidenced in his draftsmanship and the thoughtful poses of the conflicted revolutionaries. From this, the work sends forth one last question, revolution or repair? He directs ‘Washington’ himself, or itself, to “Think before you speak… Go back to the starting point, the core of the soul out of which you came.”
at 8:18 PM No comments: 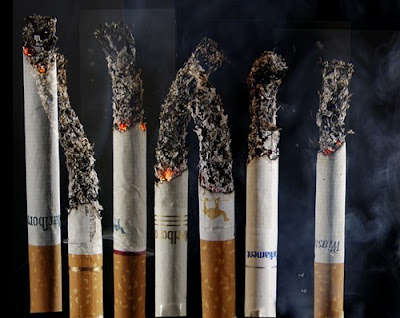 In the next room of the gallery is a hilarious projection of a five-dollar bill. Abe Lincoln licks his lips sensuously and talks nonsensical gibberish. Then there is a series of dollhouse-like structures housing miniature images of people who are also nonsensical and confused. They communicate with each other with both indecipherable language and extreme body movements. Occasionally their images are lost in a bright flash, which we then find out is an explosion that has moved them to a different room in the little house. The last two pieces are large structures with projections of lottery tickets being endlessly scratched and of a cell phone with jumbled audio snippets. This show, while commenting on social addictions and I think confusion, is really doing nothing more than just commenting without lecturing or presenting solutions. Oursler presents the issues but leaves the audience to make their own decisions about the issues. He does this by being incredibly observant but also funny and entertaining.
at 12:49 PM 1 comment:

It’s a shame that the intricate paper cutting works of Hae Yong Kwon are only on display for two weeks. Kwon began paper cutting over 15 years ago with memories of her childhood in Korea. She continues her inspiration with her travels to over 25 countries including many states within the U.S. On display are several series- 3-Dimensional, Silhouette Set, Wall Hangings, Black/White, Marriage, Landscapes and Color.

She uses a variety of tools including X-Acto knives, sheep shears, surgical, embroidery, and cuticle scissors. She mentioned that often times she has to multi-layer her works to create the desired depth effect; there are sometimes that she will affix a different colored background to the white cut paper (especially the white paper doilies) to create the effect.

Kwon has been in several publications as well as has shown in Virginia, Maryland, Pennsylvania, New York, and Tennessee.

I’m quite happy I didn’t read the fine print on the card advertising the show. I just looked at the image and decided it was worth checking out. It turned out her paintings were based on a series called Secret Garden in Spring and the titles contained the word blossom. 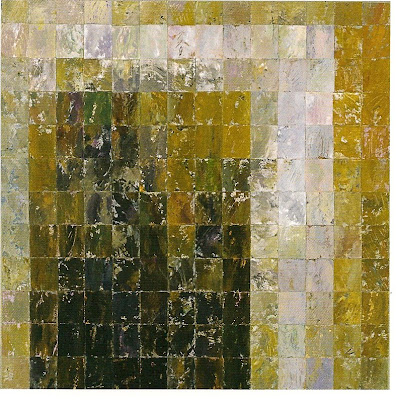 But, I am still happy. Her work spoke of nature and elements of spring without the words. It seemed to function exactly how she wanted them to which was, ‘like words in a dictionary’ arranged on canvas, ‘like phrases in a book.’ From far away they look like painted slate squares, like they have a weight to them. Up close you are surprised to see that it is just paper, soft and delicate, painted and adhered to canvas. The canvas gives the painting its weight, it acts like the earth, it is a ground but also the ground in the painting sense of the word ‘ground.’ The papers are the figures, signifying plants and other botanical substances in addition to possessing some of their qualities such as delicate and colorful.
In looking at the show I feel like she was able to transfer the words that inspired her series into paintings, leaving the viewer able to forget the words altogether and just look at art.

This exhibit features 2 local artists who are also colleagues at Maryland Institute College of Art in Baltimore. “The Grey Zone” as Weiss and App have entitled the exhibit features a combination of vine charcoal drawings & geometric acrylic on canvas. This is the first time that both artists have shown together after more than 18 years of friendship. Both Weiss and App feel that their work compliments the other although styles vary. 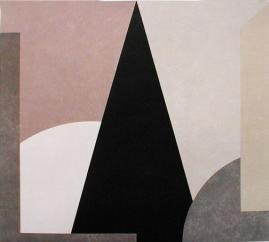 Timothy App focuses on primal forms, which to him creates an emotional level of simplicity, veracity and expressiveness. Many of his pieces are geometric in form, which he attributes to his desire to “ hold the balance between the architect in me and the poet.” 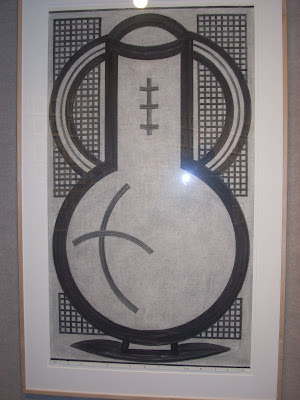 Howie Lee Weiss uses the vine charcoal as an ongoing medium with many layers to each work. He says that the charcoal, “allows me to keep the drawing open and flexible.” Many of his images are blunt and forceful as he strives for each piece to command authoritativeness. Although the subject matter varies, some cups, some eyes, some buds, some abstract, all of the pieces are a perfection on form.

see below for more details
at 9:44 AM No comments: 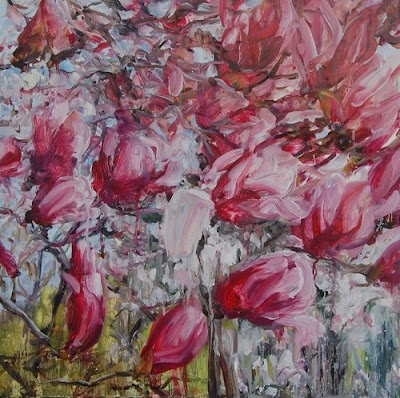 New paintings by AU student Claire Feng will be on view in the Monroe Gallery at The Arts Club of Washington from Feb 5- 28, 2009.

www.artsclubofwashington.org
at 12:08 PM No comments:

WPA at The Katzen Museum


Washington Project for the Artsat The Katzen Museum
Jan 31–Mar 7, 2009

This show features work by local contemporary artists and members of the Washington Project for the Arts (WPA)including the work of students Bonner Sale and Zac Willis, graduate Jenny Walton and professors Zoe Charlton and Tim Doud. WPA invites contemporary art aficionados to indulge their passion for art at the 28th Annual Art Auction Gala to be held on Saturday, March 7, at 6 p.m. This noted event has grown in recognition and reputation as Washington's premiere contemporary art event for not only art collectors but also business, social, and art leaders in the community. All proceeds benefit the programs and exhibitions of the WPA. For tickets and more information, please visit auction.wpadc.org. 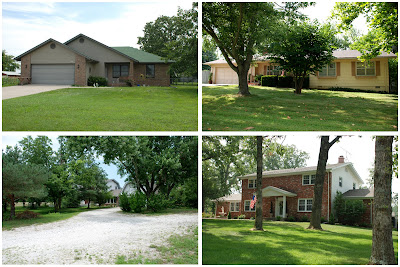 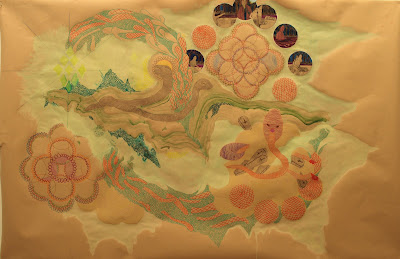 
All lectures will be held in the Abramson Family recital hall, Katzen arts center
at 11:57 AM No comments:

Flavor of The Month 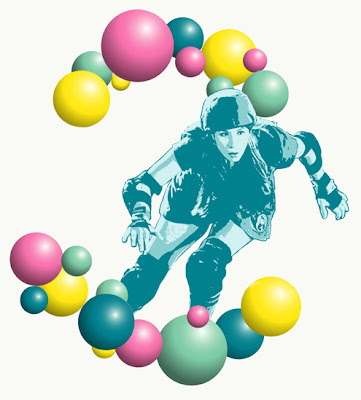