Confusion at the Museum 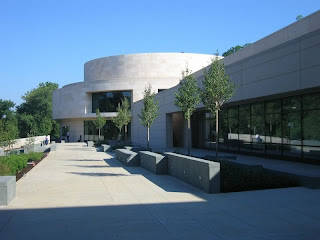 By The Ancient Urn

What should be the mission of a university museum? For those not in possession of the collections and resources of Yale or Harvard, the question is a complicated one. Funding shows, attracting shows, patronage, and filling gallery space become balls to juggle more than for the wealthy and well-endowed.

These issues are well evidenced by this year’s round of shows at the Katzen Center, which have left this MFA student scratching her head in confusion over what this museum wants to do – how it wants to present itself, what work it wants to show, how it wants to build its reputation. The range of shows has been, quite simply, staggering - and not always in a good way. The Katzen’s strategy seems to be, generally, a “blockbuster” show in the first floor galleries, with secondary or lesser known artists exhibited simultaneously in the upper floor galleries. This does not always hold, as with the Fernando Botero show on the third floor that accompanied the “Claiming Space” show of feminist artists on the first floor last fall. The “piggybacking” of minor artists on big names, though, is a recurring pattern in the museum’s exhibition schedule. Sometimes this has worked wonderfully, as with the Irving Norman show that was the third component in the “Art of Confrontation” triad that featured Botero and “Claiming Space.” Having not known Norman’s work, I for one was delighted to discover his intricate and emotionally charged social realist world. In this case, an unknown artist of merit was elevated by being shown concurrent with more recognized big name artists.

However, the Katzen sometimes plays this relationship dangerously in the opposite direction. The current exhibition group is a perfectly dismaying curatorial example. Elena Sisto’s beautiful, substantive oil paintings on the first floor are paired with still lives by Ben Summerford on the second floor that are, at best, less than thrilling, and deeply disappointing after Sisto’s works. Yet the Katzen’s press statement posted on its website claims:

“Summerford remains well-known for his still-lifes, landscapes, and interiors of exquisite color and sensitivity. ”

At the risk of sounding mean, I would seriously contest that Summerford’s work displays “exquisite color and sensitivity.” Elena Sisto’s work does. Summerford’s does not: it drags down the museum’s image and raises, doubts about the integrity of an art institution that would choose to show this work. Will the Katzen continue to attract artists of Sisto’s and Botero’s caliber if it pairs them with such as Summerford? Summerford is a professor emeritus at AU and that is certainly a factor in the museum’s curatorial decision to show him. His work may have value that is not artistic, such as historical value surrounding his role in the D.C. art world. I would assert, though, that far better work will be seen in the upcoming shows of graduate student work at the museum in April…

So far, for me, the odd mix of shows at the Katzen has worked just barely in the museum’s favor – I am still giving it the benefit of the doubt that, as with Irving Norman, I just might discover a worthwhile and previously unknown artist when I stroll down to take in a new show. It remains to be seen whether this will hold up. The museum should think seriously about what its role is and what it wants its image to be in the D.C. art world and beyond.
at 11:32 PM