Master Drawings at the National Gallery 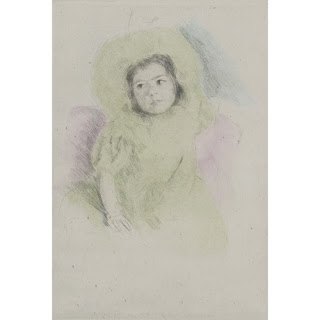 
I spent another Saturday at the National Gallery drawing from the work in the Baroque Woodcut exhibition. As I wandered out of the three large spaces encompassing the works for that exhibition, I found myself in a dark, small room filled with drawings ranging from the 1500s to the early 1900s. At first glance, the exhibition seemed only a side note, a peculiar little room filled with a small collection disconnected from everything else in the museum. I passed by each piece quickly in awe and excitement at which one I would come to next, as each sketch held its own presence. Only later did I realize that they were drawings by Mary Cassatt, a few by Van Gogh, Michelangelo, Picasso, Durer, and a Bonnard, to name a few. There was little text, which I liked very much, leaving space for my eyes to wander and my mind to survey. The frames were as ornate as you would expect in a venue like the National Gallery, but the room was not grand and the ceilings were not high. The walls were dark and the lights dim. Not what you would expect for a show filled with the starts and honest explorations of the renowned masters of our art history. It succeeded in creating the most intimate of environments perfect for sharing a moment (or an afternoon, as I did) with these works on paper.

I was impressed by the representation of such highly esteemed artists contained in this small collection. As I stepped forward towards the second room, I found myself standing about 6 feet away from a dark drawing behind thick glass. This was a set up. I was clearly supposed to find in this room the highlight of the exhibition, the most “important” drawing. It was a Raphael and it was big, and it had its own room. The piece was almost creepy, a ghost image of a Madonna and child scene; only upon close examination did I find delicate and deliberate marks functioning to model the figures and the quiet face of the Madonna. I’m not sure if it was the atmosphere or the actual drawing, but when I entered the space designated for this drawing, I had to remind myself to breathe. Of course it is a Raphael, and it’s dated 1507. This thing shouldn’t even still survive; it was a preparatory drawing for the larger painting he would later do of "Madonna and Child with St. John the Baptist." This drawing is definitely one to write home about and it seduced me- but in my opinion, any number of the drawings in this collection deserved its own room.

I would have to award the best drawing in the house to an Albrecht Durer piece titled "The Centaur Family," dating to 1505. This miniature drawing resembles a cross-sectional study, each line carefully articulated, aiming to describe volume, mass and form of the figures. Durer’s line far exceeds description of volume, mass, and form and takes this drawing into a realm of complete complication. It is descriptive, yes, but it’s so candid. There is a curious smudge near the top of the drawing, revealing Durer’s search in this small composition. The marks are reminiscent of delicate curls, few and far between, light on touch, and completely perfect in place. This drawing is right on point. The marks are careful and quick and at the same time calculated. I spent a long time drawing from this small set of characters, each time hoping to come closer to the rhythm held comfortably in the miniature piece of paper.

Both of Van Gogh’s drawings held a completely different presence from that which I have described above. They were bold and aggressive but not contradictory; rather, they were very straightforward. The figures in "Man Polishing a Boot" and "Old Man Carrying a Bucket" held a peculiar, awkward, weighty stance. The lines, heavy and strong, faultlessly described the tired men, their exhausted bodies held a sameness with the exhausted shapes that described their bearing. I was much impressed by the quality of line Van Gogh achieved through seemingly quick mark making. The marks were deliberate but also at times haphazard. The boldness was drawn onto the surface of the paper, drawn above, paper used only to catch the day's end moments of the two men.

I also found Mary Cassatt’s graphite sketches to be quite beautiful. Cassatt’s drawing of "Margot Leaning Against Reine’s Knee" seemed to be drawn in the air, the paper acting purely as the space within the depicted world. Her lines inform the paper, but in the end surpass it and float above. In "Smiling Margot Wearing a Ruffled Bonnet," Cassatt’s ability to search and find during mark-making is much more evident. The face of the child looks to be revealed from lines and characters coming from her bonnet; slowly but suddenly my eyes find the child’s face. Cassatt exposes the child to us, and to me it felt as if that which I experienced was the same as Cassatt when the figure revealed itself during mark making.
Each drawing could stand alone, and with moments like these, I don’t know how anyone could decide which gets to be showcased in its own special room.
at 2:27 AM