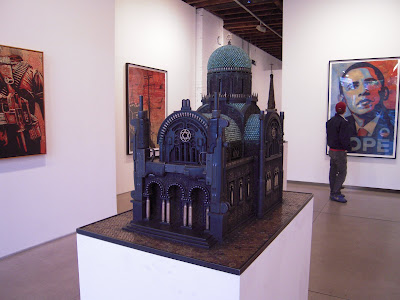 When I entered Irvine Contemporary for the opening of the show entitled "Regime Change Starts at Home" I first noticed the sculptures by Al Farrow. Shepard Fairey had several works on paper and canvas, one of which being a huge hand-stenciled and collaged portrait of Barack Obama. The other artist on view was Paul D. Miller (DJ Spooky) who was showing a multimedia project called "Manifesto for the People's Republic of Antarctica." This project had a short film with sound and several posters.
I found Al Farrow's work to be the most intriguing, though. At first glance I didn't notice that the Jewish synagogue and the Muslim mosque were made out of guns, bullets, and artillery shells. They were very detailed and beautifully made. There were three other sculptures that were also made out of guns, bullets, and shells but these also had human finger bones in the center of the pieces in glass containers. These pieces had crosses and crucifixes on them. The sculptures referenced Christian, Islamic, and Jewish religions. 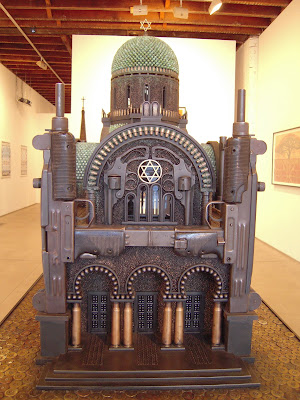 The guns in the smaller pieces titled "The Trigger Finger of Santa Guerra" hold the structure with the bullets and shells filling in the the base and the roofs of the structures. The finger bones were encased in round glass domes. The Mosque titled "Mausoleum/ Mosque 2" was the only one without any whole guns in the piece. It was made out of gun parts, artillery shells, and steel. The synagogue, titled "Synagogue 2" was the largest piece with two large guns at the entrance of the synagogue and windows with glass to see into the inside. The inside had some sort of rug in it, although I could not see exactly because the windows were very small. It was a nice surprise for there to be an inside. All the pieces had an inside and an out outside, excluding the mosque. The finger bones made up the inside of the smaller pieces and then the rug made up the inside of the synagogue. The outside of the synagogue was intricately made out of small round bullets and larger shells around the outside. The round dome roofs were a beautiful antiqued green and the rest was steal and bronze in color. The base of the synagogue was also made out of the tops of the shells. As people walked by they rubbed their figures over the shells because the artist wanted the pieces to be touched. Overall I feel like I was mostly impressed by the craftsmanship of these highly violent objects made into beautiful religious structures. They talk about the militarism that is embedded in the histories of these religions. I found them to be very powerful. 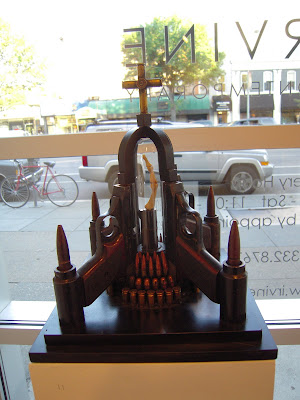 Regime Change Starts at Home is on view at Irvine Contemporary through Dec. 6, 2008
at 1:40 PM