Wild Choir: Cinematic Portraits by Jeremy Blake at the Corcoran Gallery of Art 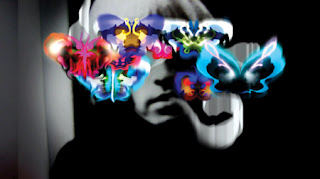 
When I went to see the show of Jeremy Blake’s video work, or “cinematic paintings” as they were designated by the text accompanying the show, I had reservations about my own ability to appreciate and enjoy the work. I have not had a happy relationship with this particular medium. Most of my experiences with video art have involved several minutes of confused looking, my thinking, “What? What is this about?,” usually followed by my conclusion that I am just not cut out for the enjoyment of this “new medium.”

I made sure to read all of the text included in the exhibit, as I wanted to give myself as many chances as possible for some kind of access to the work. Unfortunately, as I read the description of the first “portrait” I was about to view (“Reading Ossie Clark”), I panicked. I didn’t know who Ossie Clark was. I also didn’t know some of the other names mentioned in the text, and I wondered if I knew enough about the particular time period being referenced. Was I once again going to feel like a video-art-dummy?

I watched “Reading Ossie Clark” once, and I almost immediately had questions. Who was narrating this? What were they saying? There were several occasions when I couldn’t understand what the narrating voice was saying, and I felt concerned that I had missed valuable information. However, somewhere along the way, I stopped caring so much what the voice was saying- it was kind of echoing in a weird way, but at moments it sounded very clear, and I started to feel that maybe these were incidents of need-to-know information. I could pay attention here, and when the voice started to fade or echo, I enjoyed what was on the screen in a different, less inhibited way.

This is the best part about Jeremy Blake’s work: as I am writing about it right now, the things I can recall make me want to see the work again. I mean I REALLY want to see the work again. There were many moments when what was happening on the screen was visually intoxicating. My concerns about whether or not I might understand what the artist was trying to tell me about Ossie Clark dropped away as I appreciated the formal qualities of the work. I felt that there was so much room in the use of images, colors, patterns, and sounds to create a dream-like mood, optimistic in the beginning, foreboding, at times, somber and hopeful at the close of the piece, that I could construct my own meanings. For me, this piece seemed to be about dangers of beauty and excess. I would be interested in reading more about the artist’s intent, but I wonder how having that specific information might have changed and even narrowed my experience.

“Reading Ossie Clark” was the earliest work in the show, which consisted of three pieces. “Glitterbest” was the next piece I viewed, and text accompanying the piece let me know this was an unfinished portrait of Malcolm McLaren, a key figure in founding the punk movement. I noticed a difference in the sound of this piece immediately- I had to put on headphones to listen to it, and a man’s voice spoke very loudly and clearly in my ear. I found this annoying. Whereas I could choose to tune in to or ignore the narrator of “Reading Ossie Clark,” I had no choice in listening to “Glitterbest,” unless I removed the earphones. I noticed other differences in this piece: there were many more images of drawings and cartoons (seemingly taken from newspapers or magazines, not of the artist’s own work) used in this piece, which seemed to function for me in a way similar to the quality of the narration. Instead of allowing room for my own experience, the loud and clear narration and appropriation of specific narrative devices seemed to control and direct my understanding of the piece. Instead of having a general idea of what the piece might be about, I came away from it thinking “Malcolm McLaren was a cock-sure pirate-type who had lots of sex and who liked to piss people off.” Granted, I know slightly more about the punk movement than I do about Ossie Clark, but my read of “Glitterbest” was probably a surface one, at best. I also barely made it through one grudging viewing of “Glitterbest,” while I more than willingly sat through “Ossie Clark” three times.

“Sodium Fox” was the last “portrait” in the show, and it was a collaboration between Jeremy Blake and southern poet David Berman. Berman actually wrote poetry to serve as the narration for the piece, which he also voiced. In the description of this particular work, it was noted that Blake intended his portrait of Berman to be a “peep show for poets. In “Sodium Fox,” there was an entirely different relationship between the narration and the imagery. While in “Ossie Clark,” the imagery seemed to express the text (or maybe this should be vice versa?) or even evoke it, at times in “Sodium Fox,” the imagery actually literally illustrated the spoken word. I disliked when this happened, as I found myself thinking of times when Blake’s imagery alluded to another meaning of the words, or revealed a mood indicative of meaning, or even times when the imagery seemed unrelated to the narration, because it was at these times that I could struggle to make them relate. I felt that Blake allowed for these different kinds of relationships between the words and images in such a graceful way in “Ossie Clark,” providing me with enough clues that I could enjoy doing the work, whereas in “Sodium Fox,” the illustrative moments stuck out for me in an unpleasant way. I found myself thinking “Why did he do that?” In this work, I often enjoyed Berman’s poetry as much as, and sometimes more than Blake’s imagery, which I found unfortunate, because when I loved moments of Blake’s work in this show, I loved them in the ways that I love drawing and painting, and that has never happened for me before with video. However, I am fairly certain that Blake was successful in achieving his goal of creating a “peep show for poets” in “Sodium Fox,” regardless of the ways in which I felt personally failed by some of the imagery. 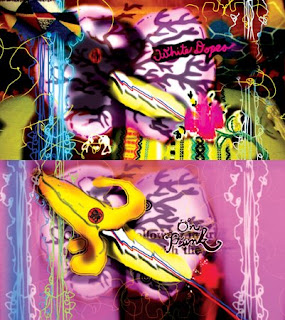 I would encourage any and everyone to see this show, especially individuals who in the past have felt as though they missed the bus for video art. Blake used different ways of giving the viewer information, but at times he seemed to expect the viewer to make their own connections. He also varied the kinds of information he presented in ways that for me struck an elegant balance of generosity and of expectation.
at 2:27 AM