The Baroque Woodcut at the National Gallery 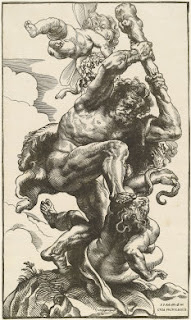 Christoffel Jegher after Sir Peter Paul Rubens,"Hercules Fighting the Fury and the Discord"

I’ve had the Baroque Woodcut exhibition on my to-do list for at least a month now. I knew that in order to get the most out of this exhibition, I needed to set aside at least a few hours in order to be able to view each small print on display in the National Gallery. I knew I would be drawn in by each carefully articulated line and I wanted to give each print its due. This particular exhibition included sixty-five16th and 17th century woodcuts that define, in my mind, the high point of woodcut as a medium. This exhibition highlights the union between the master painter as designer and draftsman and the woodcutter as craftsman and creator. This fusion is almost seamless in the work presented because the imagination, drama and energy are preserved within each delicately executed composition. One grasps more than a collaboration of creativity and skill, the marriage of a vision by both partners is also apparent. Before seeing this exhibition, I was completely unaware that the woodcuts I attributed to Peter Paul Rubens were actually carved by a man named Christoffel Jegher.

The progression of prints, wrapping around the walls of three rooms, was a delicious adventure. Never before had I seen such varied handling and line making at this quantity. The delicate and calm work of Titian, Hans Baldung Grien and Albrecht Altdorfer rang differently than the Dutch designer and cutter Hendrik Goltzius. His were bold, reminiscent of caricatures and very stylized; the line acted more like design and decoration, filling in more than describing form and depth. The Crowning with Thorns captures violence with aggressive line by Andrea Meldolla (Schiavone). The actual lines seem as though they were carved as violently and haphazardly as the depicted soldiers pierced the central figure with their spears. My eyes moved rapidly over each descriptive line, passing over the obscured faces embellished only with dark, cold lines. The handling of the block is completely appropriate to the scene.

I passed into a calmer grouping towards the end of the exhibition where I found prints by Titian and Rubens and an amazing set of miniatures by Callot. The walls were adorned with humble mark making by Jan Lievens and Giuseppe Scolari where in Rape of Persephone marks read more like natural, organic grains of wood vertically presented on the paper.

A few pieces stood out, particularly the work of Master G.G.N after Luca Cambiaso. The energy and emotive mark making produced in his woodcuts almost reduce the drawing to mere gestures of figures where he emphasizes sensitive yet descriptive contours of each bodily pose. They begin to transform into calligraphic letters of some abstract form. The strangest print in the entire exhibition, the one image that I can’t get out of my mind, was Jan Muller’s depiction of the Greek God of Silence, Harpocrates. Throughout the show, there were beautiful moments where the drawing of generic drapery still pulled me into the windy dramatic scene and here Muller depicts not a stylized headdress, but rather a particularly stiff and fragile cloth using the white space effectively and specifically. Scolari also did this, as he used white space in moderation, and when the paper did show through, completely untouched by line or merely peeking through masses of line, it was a clear and effective device.

I had always assumed the carving of a woodcut was a very limiting medium, as it seems so very permanent. I learned that there was much tweaking that the carvers did in order to get the image just right. Three versions of Herodias and Salome by Guido Reni showed the clear progression from the working line carving to the finished block. I was completely unaware of the fact that subtle changes were possible in carving a wood block, and they made all the difference in the finished print. Reni both refines and perfects this scene while at the same time he is able to keep the work fresh and alive.

The piece I kept going back to was Jan Lievens’ Balding Man. This portrait was both dramatic and yet surprisingly humble. While viewing the other prints in this survey, I couldn’t help but imagine the physical process involved in carving a woodblock, and each time I strived to view a small group of lines, or an individual line as a singular mark, I was distracted by my wandering mind, stuck on how the block would be carved. I wanted to concentrate on the role each line has as a descriptor for form. All of the prints were sophisticated, dramatic, full of energy- everything they were hyped up to be. But the Balding Man that Jan Lievens himself carved, was the epitome of austerity, subtlety and yet was at the same time so very real and even a bit whimsical with the few curls drawn upon the figures head. How could this singular piece be so emotive and yet so quiet and still? It held a presence that none of the other pieces seized. This print embodied everything I wanted to find all in one place, and on one surface.

Also included in this exhibition are woodcuts by Andrea Andreani, Jost Amman, Wilhelm Traut, Domenico Beccafumi, and many others.
at 6:18 PM