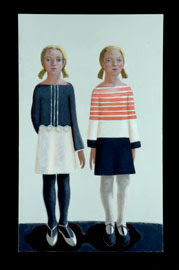 It was an early Wednesday morning and the perfect time to steal an intimate moment in a museum. I walked down to our local eye-candy museum The Katzen. Inside I found the paintings of Elena Sisto and received the fix that I had been craving.

Elena Sisto's work portrays young girls transcending their youth, thus allowing you to share in magical, and at times awkward, moments. All I have to say is if you like paintings you will love Elena Sisto's work. The paintings express everything I love about paint. Even though the work is subtle, the excitement and energy that good painting provides is pervasive.

The figures in the work are mysterious and doll-like at times. The work seems to have its own logic. It functions on its own terms and commands attention from every angle of the museum. I find myself entering the art through the girls' eyes and somehow bouncing in and out of the body or container. The figures are present but not exactly part my world either. They seem empty at times but completely present at others. It makes me feel unclear as to what role I play as a viewer. For me, this is the fascinating part of Sisto's work.

I find myself questioning: who is this girl, or is she a woman? What is my role as a viewer? Am I a viewer or am I the figure? What are the patterns on the dress? Are they some kind of flag or just an abstract element? These questions keep the viewer engaged and seeking.

The longer I looked at the works, the girls' gazes became more demanding. I could not help but see these young women as they relate to my younger sister-- evoking the events of the past months. The challenges and struggles that face girls on the brink of young adulthood make me imagine my sister's own struggles and how things were not always easy. Yet, the figures expressed an angelic feeling of ease at the same time. They seduce me with their gazes and by allowing me to look upon them, I can see the fragile states they appear to be in. There is also a great deal of strength in these young women, evident by their standing center stage and allowing judgment to be passed on them.

There is also a second body of work by Elena Sisto. They are 12x17 water media on paper. These paintings seem to take a more playful approach. The images seem to read as the artist's diary. It takes on a narrative using symbol, pattern, and childlike figures. Which bring me to my next question -- How do these works relate?

The connection is not that clear to me at first. They could be thoughts or diaries about the process of growing up. The difficulties of which I spoke of earlier relating to my sister's life become illustrated in these smaller pieces. This would explain the undeniable childlike qualities in these works. These qualities apply a narrative for the face of young adulthood that women deal with today.

Even if you do not find yourself relating directly to the work, the paint in-and-of-itself is reason enough to love Sisto's work. Whatever your reason, you should do yourself a favor and check out this exhibit.
at 12:26 AM