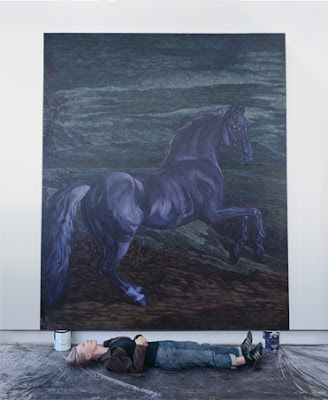 Lucy Hogg is an artist who loves color. If you were to attend one of her lectures, she would take you through the history of her work as a painter, discuss her interest in this or that style, this or that mode of painting, how her work interacts with feminism and how it takes interest in the historicity of painting. She might close the lecture pointedly, saying that painting is dead and video and photography are its replacements. You’d be left wondering why she makes these big paintings in the first place.
Hogg answers that question in her current show at Meat Market by publicly rejecting painting as a viable medium. What Hogg’s show fails to address in any way is why painting is dead. Instead, she shows how it can be quickly overpowered. With a cool face, Hogg muscles painting out the door. The photographs exercise a technological mastery of hue and balance by showing how the same painting can be “repainted” using colorways; that is, different color filters can achieve the same effect as the painting, and they can do so instantly and in a number of ways. In the back room, video steps in, and with even less effort the color options are integrated into a time-based composition.
If Lucy Hogg thinks that this proves painting’s ineptitude, then she is missing the point. Its obvious to anyone who has ever tried to paint that the medium is not the most technologically advanced. It’s obvious to any 7 year old who goes into the National Gallery and would rather be watching TV, and its obvious to me every time I use Google or YouTube.
Ironically, the painting in the show is what ends up giving meaning to the photographs and video piece. This is not because the painting is in some way special or more important, its simply because the painting brings the content that Hogg has always been concerned with to the table. The video and photographs fail to add to or alter the content of this painting, they just show other alternatives for how it could be presented. The photographs/video are not concerned with equestrian portraits, or the history of landscape painting, or the political context in which Velazquez had to operate as a painter, but the painting is concerned with these things. The images in the photos and video could be anything- a house, a cat, or perhaps most fitting, Hogg herself.
For all of Hogg’s difficulty with what painting is, with why it exists and what should be done with it, her critique comes with just a hint of Greenberg. She has placed the medium on the table next to several others, and allowed each of them to compete as self-contained modes of visual communication...but none of them really communicate anything. Well, congratulations to video for being video, and to photography for being photography, and to painting for being painting, but if this is supposed to be some instructive lesson on which media we should privilege, then I’m bored.
Maybe Hogg is broadening her audience, or bringing a new vocabulary to her work, but that doesn’t really mean that her statements are more meaningful or important in any way. If you are going to change mediums, fine, do it. It’s exciting, so long as you are using them to make something interesting, and so long as you are using them for a reason. It’s been a long time since John Baldessari made cookies, and anybody who is interested in taking credit for painting’s burial rights should consider this.
at 12:57 PM