“Claiming Space” Some American Feminist Originators at The Katzen Museum 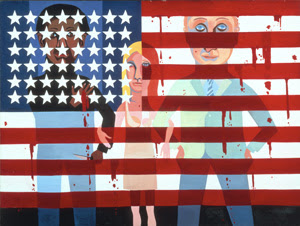 
A focus on Art and Politics


As I walked into the Katzen Museum I was immediately confronted by a diversity of intense color, rich content and material. As a whole, the show exudes a certain aura of femininity, strength and grandeur. The vast majority of works present in the show were executed using a larger than life scale that seems to both confront the viewer and demand attention, respect and contemplation. Above all, the pieces require that one reflect on the movement of feminism. The show is called “Claiming Space,” and that’s exactly what these massive works do among the white walls of the museum, institution, society, whatever.

My journey through the Katzen began with Faith Ringgold- a pioneer of the feminist and anti-racist movement. Born in 1930, Faith began a lifelong dedication of political activism against the evils of sexism and racism. “A large painting titled “Die” from the American People Series” completed in 1967 confronts the viewer as they enter the museum. Faith wanted to represent how she, an African American woman living in the U.S. during the civil rights movement felt about issues such as sexism, violence and racism in a time when only black men such as Malcolm X and Martin Luther King Jr. were delivering speeches to the American public. Faith’s paintings, including “The Flag is Bleeding” from 1967 do not seem to be about any one culture within America but rather the collective of American Society. In “Die” both Black and White people murder and cower together. They kill and embrace each other in vivid color. The stylized schematic facial features seem reminiscent of Picasso’s Guernica while the dramatic poses and gestures seem more appropriate for a theatrical production. The piece is strangely moving as one notices that the women in the painting have neither knife nor gun –both of which are possessed by their male counterparts. The women simply have outreaching arms and open mouths as if to question the meaning of humanity in such a time that in history was not so long ago.

Faith was criticized for her paintings and even jailed for her depictions of the flag as in “The Flag is Bleeding.” She later set out to make African inspired artwork such as “The Slave Rape Series.” Faith remarked in a panel discussion that nobody liked her earlier work – that nobody would show it or buy it. The latter work shown in the museum came off as disingenuous. The face of the woman in turmoil seems cartoonish and mocking. Ringgold, though a poignant artist and enduring political activist seems at least in the 70s to have left her heart back in 1967.

Art and Politics serve as congenial companions in the work of May Stevens and Suzanne Lacy with Leslie Labowitz. May Steven’s portraits of “Big Daddy” such as “Top Man”1975 and “Big Daddy Paper Doll” 1970 focus on patriarchy and the U.S. involvement in the Vietnam War. The “Big Daddy” figure is shown as a smug, fleshy elderly man in the company of his grotesque bull dog. In “Top man” Big Daddy sits amongst the heavens draped in the American Flag while wearing a halo in the outline of a solder’s helmet. On his throne he is in full support of war but far removed from its earthly destruction.

In Lacy and Labowitz’s documentation of the street performance “In Mourning and in Rage” L.A. 1977 women fight back against violence, sexual assault and their portrayal in the mass media. The artist’s intent was to critique the “sensationalized” media coverage of the “Hillside Strangler” case which consisted of repeated violent sex murders. The demonstration/performance seemed to go beyond the topic and reach the public on a much more universal level. Nine women draped in black cloth stood before a banner that read “Women Fight Back” A tenth figure draped in red stood for the rage of all women. The work of these two artists and activists is deeply moving. “In Mourning and in Rage” transcends temporal constraints reiterating its vitality in 2007 as the staggering numbers of cases of rape, sexual assault and violence against women in the U.S. and abroad seem to grow.

I’ve chosen to focus on the work of only a few artists present in the expansive show whose work was grounded in political activism during the feminist movement. The work of these women was empowering yet confronting. Why did I, a self proclaimed feminist, not know these women’s names prior to visiting the exhibition? I felt a need to be responsible as a young woman and as an artist in today’s society. Information offered on the walls of the museum inform us that the representation of women artists in museums and major collections is unexpectedly now in decline. I feel a sense of empowerment witnessing the successful collective efforts and strides made by the feminists in the show such as Faith Ringgold, Suzanne Lacy, May Stevens and the collective feminist publication “Heresies” in which nineteen or more female artists were involved in including Joyce Kozloff – another artist featured in the exhibition. The show “Claiming Space” brought about questions of why female representation in collections is now in decline and what we women of today’s generation can do about it. Perhaps it’s been just long enough for women to re-evaluate their position in the world and in the arts and as Lacy and Labowitz would put it, “Fight Back.” 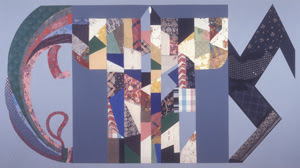 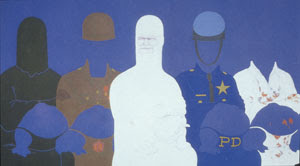