As one of New York's hottest young artists, Jules de Balincourt's season opener and third solo attempt at Zach Feuer was loaded with high expectations and plenty of PBR.

"Unknowing Man's Nature" features unearthly colorful works about a bleak, post 9/11 American culture. His signature rays of "whatever", beautiful in their doom, make a reprise, as do the tiny, unassuming figures engaged in recreational activities. Maps and text also make a comeback. 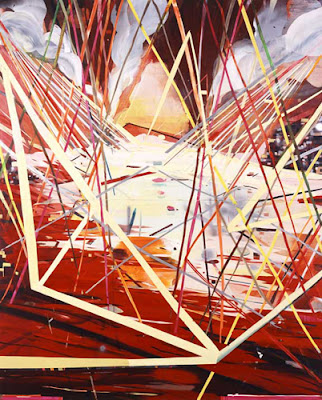 What's new to the work is a focus on nature as existing through the interference of man, as filtered through the artists mind. These works are more than simple representations of man's nature, and take action as warning signs. Despite the crowds of people on opening night, the show commanded my attention and made me think about everything from the effects of global warming to the importance of always questioning yourself as an artist. 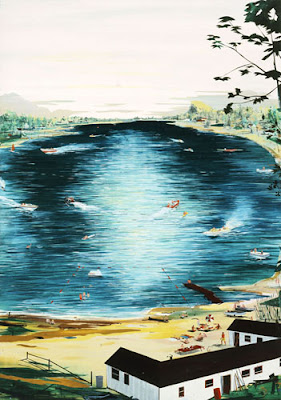 In "Hunting Room," de Balincourt depicts, what would be, a large white, rectangular room, filled from floor to ceiling with taxidermy. These animal heads and bodies adorn the room in an absurd and obnoxious manner and serve as an indication as to the kind of person who might inhabit the space, the real subject of the piece. Just why is it so important to this person to collect these heads? How do they function other than being prized symbols of status or mere decoration? Man's nature exists not only in the hunt of these animals, but puts them in a greedy human space, the epitome of "bringing the outdoors in"- but on crack.

The show brings to attention another important question, that of questioning yourself as an artist. Just as de Balincourt is attempting to un-know man's nature by first knowing it, here (I think), is an effort to know his aesthetic choices by un-knowing them. In "Unthinking the Kinks" a figure stands alone in a large white room (a gallery perhaps) amongst the tangles of the "Unthinking the Kinks Monument", which is clearly labeled for us at the bottom of the piece. The kinks are de Balincourt's signature rays of color, and here, the artist is recognizing that. In the doorway of the white room is another figure peering in, which I read as a representation of a larger audience- the gallery, the dealer, the artists peers. This figure is watching the artists every move and is ready to peg him as something. 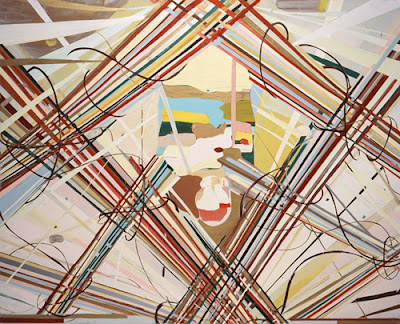 In the event that I don't know what I'm talking about, take a moment to judge for yourself. First, a link to the images on the Zach Feuer Gallery website: http://www.lflgallery.com/julesdebalincourt_2007.html

Second, a link to a video of the opening, posted on YouTube by the incredibly awesome James Kalm, aka, "the guy on the bike":
http://www.youtube.com/watch?v=f2wyRwnsMIo 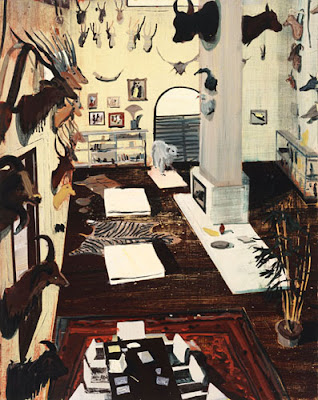