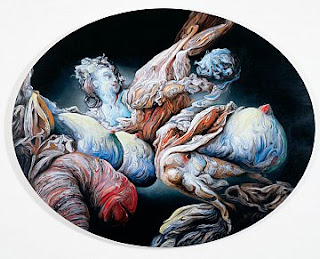 This past may Glenn Brown had an exhibition of paitnings at Gagosian Gallery in Chelsea. For anyone familiar with the faux impastoed paintings of Brown little from this exhibition will be of any surprise. The works were all in the trademark style and subject matter. The works of either anamorphic blobs or rococo young women swinging or posing in some fashion.
Brown’s work deals with the relationship of painting to mass reproduced images. Seen in reproduction Brown’s paintings appear to be heavily impastoed paint as in Frank Auerbach’s work. The stark difference is that in actuality, the paintings are as flat as can be imagined and the surfaces are highly slick. In essence he is making paintings that look like reproductions of paintings. This is Walter Benjamin taken to the extreme, perhaps flipped on his head, art in the age of mechanical reproduction, where the original now takes on the aura of a reproduction rather than the original losing its original significance because of reproductions.
I will grant that these ideas are interesting and the work is impressive in person in its technical finish. The thing is the ideas and paintings were interesting ten years ago when Brown achieved his early success and they have not changed since. Brown is making “Glenn Brown Paintings”, essentially copies of himself. However ironic this may be in connection with his conceptual basis, the works seem geared to offer collectors a chance to own a Glenn Brown of their own.
The most compelling works of the show were the paintings where the figure was removed in favor of blob-like form of fake brushstrokes. The questions this show raised to me were more related to the art world in general rather than Brown’s work. That being the dilema facing artists who achieve that level of success and the demand for a consistent product by galleries eager to appease their collectors. How can an artists avoid this inevitable trap? I don’t really have the answers, and I know there are certainly artists who have been able to continue making work that is still identifiable stylistically as theirs while still pushing and asking new questions of themselves and their work. In a prior review I referred to the most recent Dana Schutz show as an example of this. I acknowledge Brown has been around the scene far longer than Schutz and time will be the judge of her ultimate success. I will say this about Brown’s work, it is packaged beautifully. He filled the gargantuan space that dwarfs small museums with consistently well crafted paintings. He delivered the goods.
at 6:24 PM