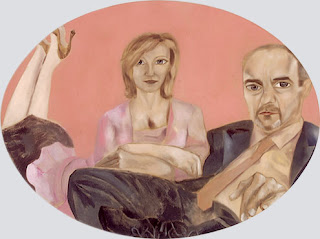 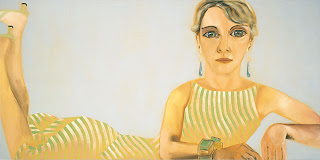 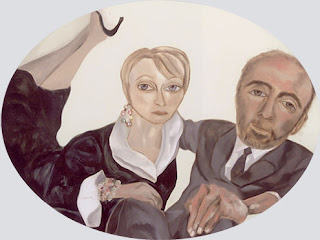 From May 5 through June 30 Francesco Clemente had an exhibition of portraits up at Mary Boone Gallery in Chelsea. I have to be honest, I am somewhat conflicted as to my personal feelings about Clemente’s work. I can remember being a teenager and seeing the film Great Expectations, for which Clemente created all the original art works. The portraits he created of the cast for that film had a great impact on me, as untrained as my eye and critical judgement may have been at the time. I really thought, and largely still think, those works were exceptional for what they were: Portraits. Those works had an influence on my decision to pursue figuration and portraiture as a means of creative expression within the context of contemporary art.
It has only been within the past five years that my feelings began to change. The more research I have done the more I have discovered, in terms of the writing, and in most cases lack there of, on Clemente and other Neo Expressionists; the relationship of critical art, to blatantly “expressive” works to the point of commercialization. While I concede certain points of the criticism of the works of these artists, particularly Clemente, those portraits still have an impact for me each and every time I see the film.
The criticism at large about Clemente’s body of work and career taken into account, and my own personal fondness for Clemente’s portraits will form the basis for this review. The twenty or so portraits in this exhibition were all around five by eight feet. They were of either married couples or solitary early middle aged females. All the sitters are obviously wealthy, as made clear by their jewelry and fancy dresses. Perhaps they are patrons of Clementes, perhaps personal friends, perhaps that distinction is impossible to make?
Even with my professed affection for Clementes portraiture their was little for me to be excited by in this show. It could be my lack of ability to empathize with such obviously wealthy people and the blatant commercial motivation of the body of work (each had a sticker price of $200,000 – $250,000, and the show nearly sold out ). I don’t think that is enough of an explanation however. Each of the paintings in Great Expectations was commissioned for the film, and each was of well known actors, who are also wealthy. I think the answer lies in the lack of success of these paintings as paintings, as images, as engaging works even if only on a personal, emotional level. There were traces of the Clemente of old, in say for example how the eyes of one woman were painted or the hands of another, but on a whole they were very bland.
at 8:59 PM