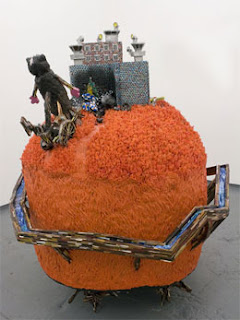 Crossbar Hotel which was up at rare Gallery in Chelsea last month featured the strangely curious paintings and scupture of Jim Wright. Wright’s work is playful to be sure, full of bright colors, bizzare imagery, and psychodelic references. His work borders upon the absurd and the paintings seem to be taking cues from the work of recluse outsider artist, Henry Darger. Yet Wright is by no means an outsider. He received his MFA in 2004 from Hunter College in New York.
Wright is thus no doubt well versed in art historical trends and movements and the interest in outsider artists as a curiosity. His sculpture seems to take the influence of Darger a step further by removing them from the realm of imaginative fantasies and creates concrete objects in three dimensions to be interacted with physically rather than merely psychically. Wright is one of many young artists using the stylization of quasi naïve as a tactic in which to approach his image making and bringing to it the polish and wit of an MFA degree. Upon investigation however, it is clear that these works are sophisticated in there decision making. 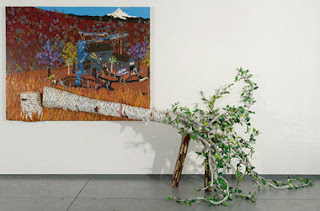 In the painting-sculpture, “Scofflaws’ Widdendrem” we see a painting of a cottage in the forrest. In the foreground is a tree that has just been cut down, fallen right beside its perfectly severed stump. The stump and tree however are three dimensional. The stump rises off the painting in relief and the tree has fallen out of the picture plane all together, leaving Wright’s day dream and entering our space; quite literally bridges the gap between “window and object” in painting. 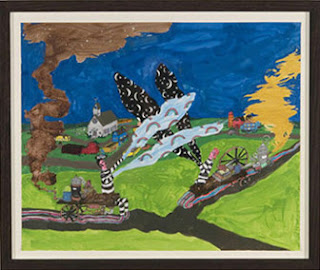 One of my favorite pieces in the exhibition was the small work on paper, “Peace Machine”. In this painting there is a fork in the road where two strange vehicles; which appear to be wagons with only one set of wheels as opposed to the two sets which gravity would require to hold off the ground, are on a collision coarse with each other. Both are occupied by curious figures in the black and white stripes of prison suits stereotypical of the early half of the twentieth century. In the wake of both is an oozing rainbow spewing from there legs where their feet should be. Out of their wrists (in place of hands) are projected arched rainbows and crescent moons surrounded by twinkling stars respectively. Amidst all of this artificial interjection of “Peace” and happiness is the oddity of the fact that the engines of both vehicles are spewing black smoke and yellow-brown smog, commenting perhaps on the notion that no matter how hard we humans try to manipulate our environment for the better, we leave behind a trail of pollution. 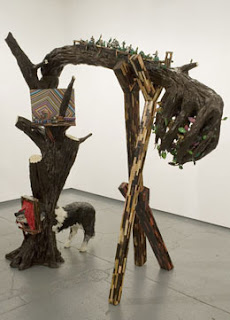 The show also consists of two works that are sculptures, “Dulocray’s Disboscation” and “Verticordious and Scopperloit”, yet both sculptures are painted. Both purposefully noted in there description: “Acrylic on foam”, “Acrylic on foam and wood”, described the same manner as the paintings which are “Acrylic on panel”, “Acrylic ink on paper”. These notions of painting/sculpture, window/object seem to be the binaries that Wright is concerned with. Judging by the decsriptions of his materials, Wright is giving primacy to Painting with a capital P. He is not calling it paint on foam, but rather giving it the specificity of the type of paint on foam, thus questioning the nature of painting and its function. That being said, for all the questions I feel that Wrights work raises, there is still a lack of pretentiousness. His paintings are fun, strange and interesting. 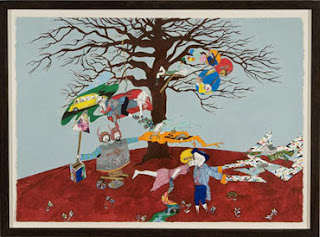 Aloha from the MFA program @ UPenn. We wanted to invite you guys and gals to our open studio event that we having on Friday April 27th. We could not find any other way to contact you, so we thought we would take a chance and post here. For more information please email me at penn.mfa.08@gmail.com. Anyway, great blog!