Short stories, lasting impressions: A review of Paula Rego at the National Museum of Women in the Arts 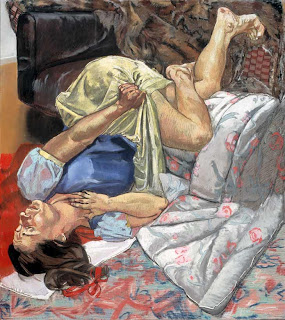 
The National Museum of Women in the Arts in Washington D.C. is the first U.S. museum to host a retrospective exhibition of Paula Rego’s work. Born in 1935, Paula has led a rich and complex life that has often served as the inspiration for her work. Paula enrolled in London’s highly acclaimed Slade School of Art in the 1950s, when she was still painting in acrylic and oil. An accomplished printmaker and admirer of Francisco de Goya, Rego has always been an avid drawer.

Several pieces in the collective are accompanied by text, which, similar to her drawings, tells her life’s story and offers insight to her evocative, enigmatic work. I found myself wandering through the museum, stopping to read more about the larger than life drawings that confronted me at my every step. The exhibition is dynamic and carries the viewer chronologically through Rego’s life from a beginning art student to an internationally acclaimed artist. Though her paintings are rich in subject matter and just as controversial as her drawings and prints, Rego’s pastels are on another level altogether. The pastels sat heavy with me, demanding my attention and drawing me in.

The worked, hearty surfaces of Rego’s pastels tell the story of the artist’s hand. I’ve always loved drawings because each line is so apparent, on the surface, and completely unapologetic for its presence. Also unapologetic are the women’s figures that sit like solid masses on the paper. They give the paper weight and demand that you pay attention to them, whether you want to or not. Paula’s compositions feature robust women with muscular, dare I say stocky, limbs that climb into graceful ballerina poses in the series “Dance of the Ostriches.” The women’s bodies are real, earthbound, and not so easily swept away by a good stiff breeze. Their flesh is tangible, even slightly greasy to the touch, rendering it all the more “human.”

The female figures in Rego’s compositions often take on the role of young women or young girls while still maintaining a mature, all-knowing appearance. In “Swallows the Poison Apple,” a mature woman takes on the role of Snow White who has fallen over a couch in her last moments of struggle. Snow White, though moments from death, grips her dress to keep it from falling open. The woman’s face is not only mature, her actions signify that she knows we are watching her, and she thus acknowledges our presence. The pose also comments on the desperate predicament fairy tales place women in where youth, beauty, and chastity are essential for one’s survival.

Rego’s “Triptych” from 1998, renders the topic of abortion palpable. Rego was responding to the Portuguese government’s refusal to legalize abortion. Young school girls inhabit the uncomfortable, lonely rooms in these dark compositions. The text informs us that Rego chose to depict adult women as school children to make them seem more vulnerable and helpless in their situations. Though the figures don school uniforms, their faces appear mature and accusing as they gaze out at the viewer. One young girl buries her head into her pillow while writhing in pain. The other figures stare out whether lying on a bed or crouching over a bucket. Their pain is silent and their solitude apparent. The “Triptych” leaves one feeling weighted down with the issue that continues to face women across the globe.

Rego has received mixed responses to another controversial series titled “Dog Woman,” where women take on the attitudes and actions of dogs. The series is not about demeaning women or calling women “bitches” or championing subservience. The primary model is Rego’s close friend and nurse to her then ailing husband. The series is about the relationship that dogs have with people. They are extremely loyal, somewhat dependent, and loving. However, if you treat them badly they will curl back their gums and give you a good bite. Rego said the ordeal of losing her husband inspired the body of work. She was examining the relationship that wives have with their husbands. Both depend on each other greatly and when one is gone, it displaces the other quite a bit. Women can be both vulnerable and very strong and powerful at the same time, which the series poignantly illustrates.

Whether addressing the meanings of fairy tales, political issues or the intimate relationships between husbands and wives, Paula Rego’s work draws you in. This dynamic body of work takes you through the span of her life, informing you of the stories that inspired her and the tragedies that challenged her. The exhibition lays claim for only one complaint: it leaves you wanting more.
at 12:18 AM