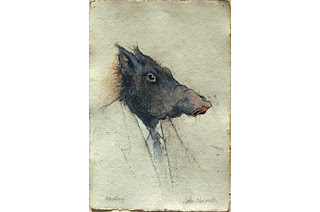 Looking at the work of John Alexander, I was first struck by narrative qualities of the images. I wondered if these works portraying animals were created to serve as illustrations for some specific body of text, because it seemed as though the animals were caught in a telling moment. Often I found myself speculating about what might have happened to cause the expressions and postures of Alexander’s subjects, and it was the animals’ oddly human-like expressions that drew me into the work.

I felt particularly interested in and engaged by “Warthog,” a mixed media drawing depicting the title animal. As I looked at this drawing, I found myself ascribing adjectives to the subject which I would typically use to describe people, not animals, and particularly not a warthog. I thought this individual (“individual,” because I wasn’t thinking of the subject as a “warthog” until after I read the piece’s title) looked serene. Dressed in what appeared to be a man’s suit and tie, he seemed to peacefully tolerate my gaze as I studied the drawing. I had little doubt that if I were to meet this creature in person, he would be able to speak, and I imagined possible conversations.

Another drawing had an almost opposite effect on my desire to interact with the subject. “Man of Distinction,” also a mixed media drawing, had me immediately disliking the portrayed animal. I was unsure as to what kind of animal this “man” might be, and I wondered if he might be an anteater or maybe an aardvark. Regardless, his pose within the drawing, head tilted up to the side, nose in the air was one of unmistakable disdain. While “Warthog” seemed possibly amenable to my presence, “Man of Distinction” appeared to think himself above the regard of the viewer. Not only was he assuming a typical posture of snobbery, but he also cast a sideways glance towards the viewer through a narrowed eye. “Man of Distinction” didn’t just disdain me, he despised me.

I was interested in Alexander’s juxtaposition of human clothing and emotive traits with animal identities, but this relationship did not seem as convoluted (as in “Warthog” and “Man of Distinction”) in many of the other drawings on show. Large drawings of birds allowed me less access to the subjects, as the birds were either turned away from me, in flight, or seemingly existing as studies only. “Angry Egret Baby” and “Bird of Prey” seemed to offer similar relationships between the animal and the human, but because these subjects seemed overtly angry or confrontational via their expressions, I did not want to engage with them for an extended period of time.

Clues to Alexander’s content were uncovered through a perusal of Hemphill’s press release: “In this time of political upheaval few established, mature artists choose to address political issues. A distinguished exception is John Alexander…Alexander’s admirable vision references the critique of political fat cats and the apathetic or compromised public depicted by Daumier, Ensor, and Grosz.” In reading the press release, I also noticed that Hemphill’s show was occurring concurrent with a retrospective of Alexander’s work at the Smithsonian American Art Museum. I felt interested in whether by seeing the Smithsonian show I might gain more insight as to the specific identities of these characters. Perhaps I would get a chance to see the subject of “Man of Distinction’s” disdain (then again, perhaps I was the intended subject). Maybe if I were to observe “Warthog” in a particular setting, I might understand the significance of his serenity. However, the drawings presented in the Hemphill show, though they may have been preparatory in nature, also function as stand-alone pieces, causing me to question such relationships as that of the natural world to the cultural, and the differences between animal and human nature.

After noting that Alexander addresses contemporary political issues, I also wondered about the ironies of casting animals in political situations. Upon first consideration, I thought that this might be interesting because animals do not behave politically, then I realized that was untrue, as animals often do function in hierarchical organizations. Perhaps in using animals as stand-ins for humans in his commentary, Alexander reveals a truth about political dealings and their foundation in the animal kingdom, where the “strong” (this word would certainly have different meanings when applied to the animal kingdom versus the political arena) are the ones who survive and proliferate.
at 12:39 PM