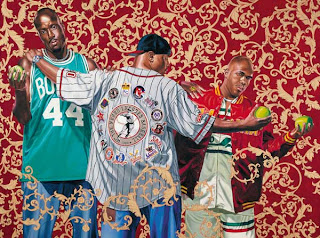 "Recognize!," a show at the National Portrait Gallery, is a contemporary look at portraiture in the hip hop world. The show consists of photographs, paintings, video, installation and graffiti. Overall, the show was nicely arranged. The flow of layout worked well for what was being shown and for whom it was being shown too. It showcased a selected number of artists whom are known for works associated with the hip hop community. The structure in which the show was arranged allowed for nice mixture of mediums to be shown together and not overpower one another.

One of the main reasons I wanted to see the show was because of Kehinde Wiley’s large oil on canvas paintings. I had not heard about him until recently when he was featured in several magazines and there was buzz about him in the graduate hall. So I started researching and examining his work. The colors, the scale and the ornate backgrounds immediately impressed me. The paintings where very exciting to see in print and on the computer. After discovering that there was going to be six of his works at the National Portrait Gallery I knew that I had to see the work.

After weeks of waiting I was anticipating seeing how amazing these works really were. I arrived at the museum and prepared myself for what I was hoping was going to be an awesome experience. Finally I was looking at these large oil paintings of African Americans stylized with ornate patterns. It was everything I had thought it to be except for one thing: the quality of the work. When I approached I did not notice, but as I got closer, I started to see the quality of line and just how fast or carelessly the work was painted. Upon seeing this, I changed my opinion about the work. I had such high expectations of the pieces. Seeing the paintings for the first time and realizing the inconsistencies, I became disappointed by the work. This made me examine the tactics being used in this work.

Wiley’s work is clearly made to be viewed at a distance or in print. One can not say that the work is not eye candy, but after seeing the work in person I understood what type of eye candy it was, the kind of work that is reproduced easily. I felt like I was in a trance. I was turned on by the works for their beauty and that alone. I did not look at the idea behind the work, or even consider what Wiley might be trying to say with the work. I got lost in the colors and patterns. After seeing them, I felt like I was jolted out of my trance by the fact that they are not painted with as high a degree of craft as I was expecting. After this happened, I started to question Wiley's ideas and why exactly he was painting these. The paintings fell short after I dismissed the craft. There is nothing left as far as a concept for the work other than the quick read and that first wow factor of how aesthetically pleasing they are. Where does that leave the work and where does he go from here? I am sure he is going to keep making these and will continue to sell these works. Despite an artist's becoming famous, he or she should not forget his or her craft.
at 12:23 AM

Kehinde Wiley says he wants to brutalize the old masters (because they are white).