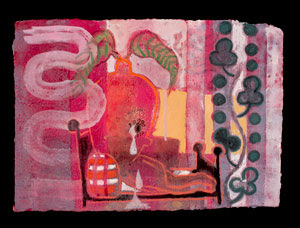 The first is a series of mid-size oil paintings of adolescent girls with large, wide-set eyes who look like they might have stepped out of a Balthus painting, minus pedophilic undertones and geometric spaces. But in contrast to Balthus’, Sisto’s girls wear their geometry overtly, in clothing made up of grids, diamonds, stripes and triangles. The paintings assimilate and respond to historical uses of both geometry and the body in painting, particularly 20th century uses. If minimalism was the 20th century home par excellence of geometry, one could argue in a post-structuralist vein that united with geometry in Sisto’s paintings are precisely those things implicitly excluded from minimalism: the female and the body. And whereas Balthus’ provocatively posed nymphettes participate in a painting geometry whose resulting narrative does not often concern them as individual people, Sisto’s figures – while of a certain type – feel more like individuals. The first painting in the series, Harlequin, is an example. We know the harlequin figure well from Picasso, Cezanne and others, but Sisto’s harlequin is something different: not a boy but a girl, frontally posed, engaging the viwer’s gaze. She enlarges our sense of the harlequin archetype, and it in turn enlarges our sense of her as a subject.

But more than the social issues they raise, what is impressive about the paintings is their enduring presence. They have a solidity and realness that makes us believe the fiction that Sisto weaves. You feel that they – both the paintings and the girls they depict – won’t be going anywhere any time soon. A tension between self possession and vulnerability is at work in them, having to do with the juxtaposition of logical and stable geometric systems with the inherently transitory adolescent body. Sisto’s paint speaks to these dynamics as well: the paintings are built up with areas of significant impasto, but Sisto will brush in the contours of a hand in thinner paint bringing a just-so spontaneity to the work. These are paintings that bear close, contemplative looking.

The second body of work, a series of smaller works on paper, is a somewhat-confusing complement to the oil paintings. Here, Sisto’s ancestors are (at least for this reviewer) harder to identify, though echoes of Phillip Guston’s late figurative work appear in the imagery, which features cartoonish vegetable-headed figures engaged in scenes often of some pathos. One senses that after the oil paintings these works may be something of a release for Sisto, with their decorative flourishes and whimsical, if melancholic, aspect. Their formal and conceptual relationship to the oil paintings is less clear, though a concern with pattern and certain themes – such as twins or doubles – are common to both. In the end, the small works are hard to appreciate on their own terms after the oil paintings. But if they are part of a practice that allows Sisto to make the oil paintings, then we don’t really care.
at 2:18 AM