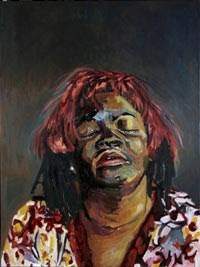 Come join us for a discussion with artist Beverly McIver about her work tonight, Feb. 15th in the Katzen Center Recital Hall at 6pm.


"Beverly McIver, born in 1962, grew up in . She earned her Bachelor of Arts in Painting and Drawing at and her Master of Fine Arts at .

Explorations of racial identity are inseparable from McIver’s consciousness as an artist. She experienced and absorbed issues of racial identity as a black child in the South at the height of the Civil Rights movement. These issues have become personified in her paintings so that a portrait of the artist is truly a complex comment on biases, prejudices and preconceptions associated with stereotypical notions of being African American.

As both artist and scholar, McIver explores ’s long history of negative portrayal of African Americans, from 19th century minstrel shows to the hip-hop era. By reclaiming the imagery as her own, she infuses it with pride and a power to control the impact of racist imagery on the collective conscience. The resulting body of work conveys pride as well as making peace with preconceived notions. Via her subjects, McIver connects her own experience with the breadth of the human experience through an examination of how “otherness” in any of its manifestations affects identity and one’s place in the world.

She has accumulated numerous honors and awards for her work, including an Anonymous Was a Woman award, a John Simon Guggenheim Foundation Fellowship, a fellowship at Harvard’s Radcliffe Institute of Advanced Studies, and a Tiffany Foundation award. In 2009, McIver was one of 30 artists invited to participate in the of Arts and Letters’ Invitational Exhibition of Visual Arts. Her work titled Coming Home Hurts was selected from the exhibition for the Academy’s purchase program and will be donated to an American museum. 2010 witnesses Face to Face, Boulder MoCA’s solo exhibition of the artist’s bold portraits.

McIver has held teaching positions at , Central University, , , and Arizona State University-Tempe. In 2007, she returned to her alma mater, North Carolina Central University, as Suntrust Endowed Chair Professor of Art and was also awarded an honorary doctorate."-Bio from LewAllen Contemporary.