Everything Is Illuminated: A review of the National Museum of the American Indian 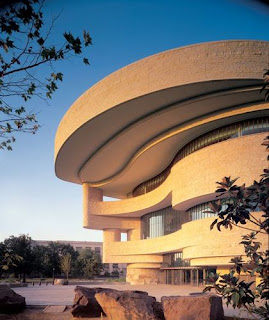 The National Museum of the American Indian (NMAI) in Washington DC is illuminated. I had not yet visited the museum located on the national mall before last week. Construction began on the museum in September of 1999, making it a fairly young addition to the Smithsonian institute. One might presume that the word "institute" or "institution" does not bode well with the American Indian population. I suppose the word itself sat heavily with me as I perused through the space allocated to the preservation of our nation’s first inhabitants.

Museums always have an “air” about them; cold, stale, uninviting, scientific, sterile. Shiny glass often keeps prying hands at bay. The NMAI arose through the collaborative efforts of Architectural firms (Jones and Jones) and the Native American Design Collaborative. The building has an Eastern orientation reflecting the solar calendar and worship of the Sun God. The bottom floor boasts an impressive “welcome hall” rotunda. The ceilings form a dome with an open center to let light in, again making reference to the sun. Light infiltrates the entire museum, whether it is sunlight, moonlight or even starlight.

As I walked up the curved stone staircases to reach the fourth and final floor, I noticed the metal guide rail was warm. Light tracts had been installed underneath the banisters to make them both visible and warm to the touch, thus less foreign and uninviting. The fourth floor is home to a star lit, lunar pathway that guides visitors around the rooms displaying ceremonial dress and artifacts. The starry ceiling stole my attention however, as I could not stop staring upward at the incandescent display. I remarked to a fellow visitor that it felt “magical.” Then I smacked myself. I had been lured and wooed by the architect’s bag of tricks. I recall more about the space and the feeling of the museum than any facts or figures I may have digested. It was all so…enticing, so welcoming. The curved walls, lack of any corners and muted “earth tones” made me feel at ease. I even felt warm and cozy with the snow raining down outside. Wait…what about the people?!

I watched a 13 minute movie presented by the museum to learn more about THE PEOPLE. The theater was round with inset benches. In the center was a tree-like structure onto which the film was projected. Everyone sat in a circle. There was no hierarchy to the seating. The film exhibited various aspects of tribal cultures. I did in fact learn that there are a multitude of tribes present in the United States. I was fascinated by the ceremonial songs and dances and the festivals that still take place every year. Just as I was taking it all in, the ceiling commanded my attention once again. I had just gotten over the glowing rock/orb in the middle of the theater when a forest encroached upon the scene. The domed ceiling had a forest full of greenery and wildlife projected onto it. “Ahh, ooh.” Magical. Wait, what did that woman in the film just say?

The NMAI captivated my attention. I’m just not sure it was in the right way. The architectural space is amazing and feels nothing like an ordinary “run of the mill ole museum”. It evokes a sense of openness and a presence of nature. Several American Indian tribes provided ideas and feedback in regard to the building of the space, and their influence is felt tremendously throughout the museum. However, I would have liked to have seen more artifacts from antiquity. The museum informs us that American Indians have inhabited the United States for thousands of years, yet most of the objects on display are from the 19th and 20th century. I would love to have learned more about what the artifacts and household objects on display were used for. Little information save for a tribe name and date was given. The collection the museum houses is absolutely massive; however, only a fraction of it is currently on display. Why is this? In addition, I would have enjoyed my visit much more without all of the glass dioramas. Display cases housed mannequins dressed in tribal costumes engaging in “everyday activities.” I felt that the act of “looking in” exoticized the American Indian people. The notion of “other” is something tribes have been continuously fighting against in life and in the arts. In addition to feeling guilty for watching the elaborately clothed mannequins, I in turn felt more like an outsider. And the museum felt more like an institution.

My experience visiting the museum was one of mixed emotions. Whereas I respect the integrity of the architecture, I am repelled by the lack of focus and presentation in the exhibitions. Though the architecture and usage of light are impressive, these things overshadow what the museum is truly about; the people.
at 12:09 AM