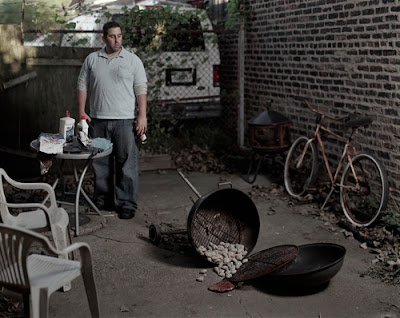 
Nathan Baker’s “Rupture” offers a view of small breakdowns presented on a large scale. Upon entrance, the spectator is faced with images that are devoid of humans, but not of human activity. The latter is revealed through the wounds inflicted on the otherwise peaceful environment: we see a living-room set with an island of ash and cigarette butts on a nicely groomed carpet, a flipped over bottle of Pepto-Bismol spilling its phosphorous contents onto a shiny white bathtub and sink, a gallon of ice cream mess on a kitchen floor. These everyday disasters are “nothing to write home about.” They are too mundane to evoke sympathy when they happen to others. Yet, these petty accidents can be utterly infuriating when they happen to us, bringing to light our own clumsiness, negligence, ineptness. The spills depicted are barely dead, in some cases the finishing drops are captured in flight. The faster we act the better are our chances to prevent the eternal damage. So off we run for that life-saving mop, or the dust buster, the paper towel, quite likely uttering the compulsory “oh, f*#%!” But why? The second set of photographs, whose composition includes the flawed human actor witnessing the harm that they caused, asks precisely that question. The people in the photographs do not move, they remain at their vantage point staring pensively onto the floating laundry detergent and the knocked over barbeque grill. The Artist Statement explains what is being shown is that fleeting moment before the speed of mind allows us to grasp urgency of the situation and gain control. But from the viewer's perspective that moment is lasting. In addition saying “calm down,” the moment’s tenure is inviting us to note the spills’ aesthetic qualities, which are accentuated by the artificially unrealistic depth of field. And yes, those silky blemishes are, in fact, beautiful. Photoshop does not lie.
at 5:44 PM

Funny, I didn't Photoshop anything...