In his signature Totalitarian style, Shepard Fairey, the longtime darling of design school frosh, compiles potent imagery of child soldiers necklaced in bulleted bandeliers, flaming oil derricks and dustbowl windmills, and of course the headshot of Barack Obama which was highly distributed in bumper sticker form. 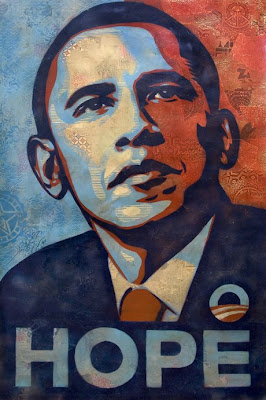 At first glance, these pieces, as in most of Fairey’s work, function differently than most propagandistic art. The blood red forms, quilt-like patterns, symbols, and logos question the viewer directly. Or should I say interrogate? They force the viewer in the most brutal fashion to question oneself. Traditionally, this media is used to impose the iron truth or depict the absolute one. The viewer, unaccustomed to the straight-forwardness of the red and black and unaware of the intricacies of process gets Fairey’s “Straight-Talk.” This is where Fairey is strongest, as subvert.
However, this does not last long. The piece of the show at Irvine Contemporary is the Obama/Hope piece. Even though, it has grown iconic with the man, and could potentially be dubbed a masterpiece of the moment, hopefully an eight year moment, this piece alone weakens the other work in “Regime Change” by being the visual currency of a giant(albeit a benevolent one, a BFG). There is no problem with an artist/designer trying to make a buck, but Fairey’s good work has become undercut by merchandizing and chosing sides in a fight that historically benefits the most power hungry.
With Fairey’s appropriation of style and the balancing act that all political artists must perform one has to wonder at this point what Fairey’s intent might be. Could it be to create mixed signals ironically within the mostly black and white of forms? Or could this just be Fairey choosing to take on the softball lobs of moral predicaments simply to save face in order to remain true to his company’s image and ever present logo. I do not know.
Fairey’s work does have genuine impact but standing as we do now in the shadows of an abusive Washington administration, one has to be frustrated that these pseudo propagandistic posters do not have a more consistent bite. In addition, one absolutely cannot ignore the painful irony that exists in the appropriation of the communicative styles of designers like Gustave Klutsis, a victim of government-ordered murder, for the political campaign.
at 10:52 AM

the guy is cashing in on obama's light..that's all. boring and not very subversive. give the president a few years and he may do a even more pathetic pseudopropapop new updated series. go baby go.