ID-entity was a two-site show exhibited in partnership between Transformer project space and the Mexican Cultural Institute. I visited Transformer, which featured the works of Saul Gomez, an artist based in Mexico City.
While there I was drawn to his wall installation Untitled, 2008, a symmetrical piece made with mixed media. He composed another world where cars were made out of bread and stars or suns have bottle cap centers. Images of parts of a machine run down the center as if fueling this odd world into existence. What I found most interesting about this piece where the three-dimensional planes that explode into the wall creating a two dimensional graphic blast.
In contrast to the white background for his installation was the black background for his series of smaller works on paper. They reminded me of a strange outer space with both stickers and hand drawn stars that circled around a pencil drawing.
Another installation piece, also Untitled, appeared to be a landscape hill of bottles and a picture of a tree was attached to the wall but also seemed to be sitting on two of the bottles. 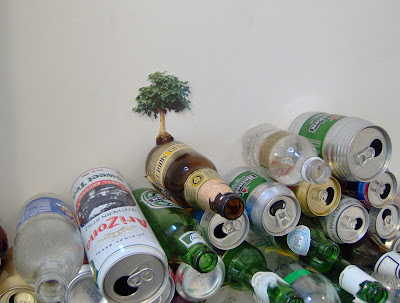 His use of everyday materials definitely called attention to the relationship between consumption and identity. For me, his works on paper stay as images of a space that remain as fictions. On the other hand, his installation pieces contain three-dimensional elements that allow the viewer to enter into the two dimensional fantastical landscape. 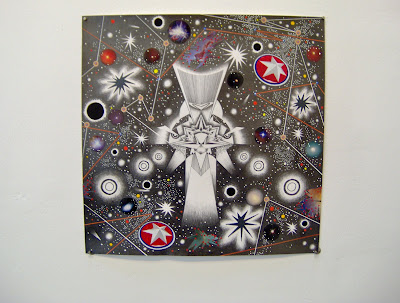 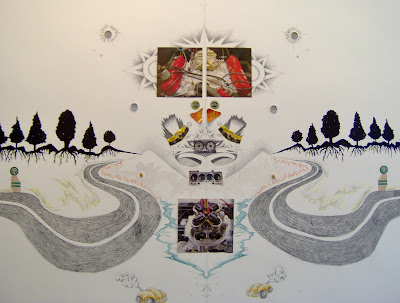