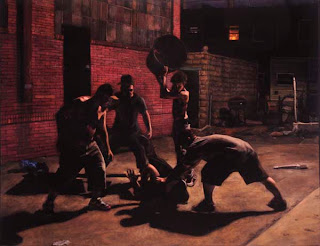 Walking into Tony Shore’s show at Grimaldis Gallery, the first thought in my mind was: “Goya.” Shore’s paintings are dark – both literally and figuratively – but not for the reasons you might first expect. A still life with a sheep’s head was the first image to enter my line of vision, recalling immediately Goya’s painting of two sheep heads shown in the Guggenheim’s Spanish painting show last spring (one of the best paintings in that show). In their strongest moments, Shore’s imagery, palette and compositional strategies echo those of the Spanish master, but his choice of materials brings something entirely different to the work, speaking to insidious violences particular to our time.

Shore paints in acrylic on black velvet. You don’t realize this until you walk up to the paintings. What appears from afar as an overall softening of edges is explained upon approach by the velvet surface. But there is nothing soft in Shore’s subject matter, and this juxtaposition of subject and material appears to be the crux of his slightly depressing yet realistic content. I got bothered in front of a still life with a pig’s head, glass and candle stick because the glass and the metal candlestick appeared made of the same stuff as the pig’s head – nothing of the solidity or coldness of glass or metal was present. In scenes of young men beating each other up in nighttime alleys or playgrounds, the velvet acts similarly, softening the edges of forms in a way that seemed at odds with the subject. Shore paints thinly to create this effect, and it is clear he is a good enough painter that this application is not an accident of the material but a choice to let the velvet have its voice.

We are left to wonder, as I did for most of an afternoon: why velvet? What does it mean to treat these subjects in a kitsch medium? Why does he want me to think of a velvet Elvis while contemplating sheep’s heads or street violence or an old man alone in a dark room with an i.v. and a catheter? I think Shore wants us to be aware that the real violence of our times is the disguising of violence, either by our desensitization through overexposure or Hollywood glamorization, or by its hiddenness in forms not obvious at first. Insidious violence may be the most violent of all, because it can act on us longer before we are aware of it (if ever we become aware of it). In Shore’s paintings, velvet acts like a kind of soundproofing, muffling the sharp visual cries that might otherwise issue from the works. Just as kitsch, represented by velvet, is pervasive, so, Shore suggests, are the forces in popular culture and media that dull us to violence and then lull us to complacency over our desensitization.

“Violence and Tranquility” is a comment on painting in the age of technology and mass media. Goya’s contemporaries may have been truly disturbed by his paintings and etchings – as some of us today still are by violent photographs, video and film. On the one hand, Shore seems to question the ability of painting to move contemporary audiences, making paintings that are nostalgic elegies for days when painting on canvas was a strong enough battle cry for the masses. At the same time, his skill and sensitivity as a painter lurks so close to the velvet surface that we sense the images are there in full force, imbued with a truly felt, painterly touch, if only we could take the velvet out of them.
at 10:56 PM