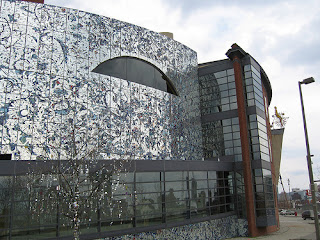 A Friday afternoon trip to the American Visionary Art Museum proved to be quite the eye opening experience for me. I found myself browsing through each room much differently than I do in more traditional art museums, such as the National Gallery of Art. It is clear that this establishment does not follow typical museum trends, and I was less distracted by wall mounted paragraphs and info lines. I let my eyes wander and simply take in the amazing art. A surprise was found around each corner, glistening gems and mirrored surfaces, and satisfying over-ornamented sculptures with glitter and all that glistens. This was right up my alley.

As I made my way to the top floor of the museum via the impressive grand staircase, I began to ask myself what this place was really all about. I kept repeating the word “visionary” in my mind. I began making connections to my very straightforward understanding of outsider art and during this experience, I began to see fabulous examples of this pure inner vision that I have heard so much about, but felt I had never really seen before. There was no apparent response to the art world; there was only a driving force, maybe a belief system, that compelled these artists to make authentic, honest paintings and sculptures. I started looking all around for the particular innocence in this type of art-making, but as I reached the top floor to the show “OCD: Obsessive Compulsive Delight,” I questioned my notions all over again.

OCD is one of AVAM’s permanent exhibitions that showcases artists who are driven by their compulsion to make art. I was drawn in by the title, expecting something novel from clinically disordered individuals fighting battles everyday with different aspects of an Obsessive Compulsive Disorder. Instead, I was confronted with the exploitation of an artist with Down syndrome, one who was clinically depressed her entire life- an introvert, and another raised by a mother who was emotionally unavailable. Each of these women lived with difficulty, produced possibly tragedy-driven or inspired work, but may not have been consistently driven by compulsion. The connection between artists was in the word “compulsive,” but after seeing the exhibition, I found it much less interesting, and a bit misleading.

I have to say that I wasn’t turned off by all the work, but rather the structure of the show and even more so, the trajectory of the show. I enjoyed Judith Ann Scott’s sculptures, the artist with Down syndrome who had been institutionalized her entire life. After her twin sister rescued her from the institution as an adult, Judith began making incredible sculptures out of yarn, found objects, foam, and fibers- basically anything she could get her hands on. She was a kleptomaniac, one veritable compulsive amongst the included artists. Judith Ann Scott had a burning desire to steal things and hoard them away. Influenced by craft events that she and her sister frequented, she began binding the stolen objects into the center of her sculpture pieces, hiding them, as if in the center of a coconut. The need for her to wrap her objects up, binding them into a work of art moved me, and the sheer monumentality of the sculptures made this artwork powerful. However, I could not help but find this entire grouping of Judith Ann Scott’s work questionably exploitive. I have to say, at least with this part of the OCD show, a driving force of the work was an actual clinical obsession.

Moving on to Zona Gordon’s work, I was compelled to move close, and then step back as I tried to put together stories of each rag doll presented behind glass. The peculiar little fabric dolls lacked arms and legs, and they resembled many different archetypes of female figures. The sewing seemed intimate, and the different textiles used to create each doll gave a small clue to the decisions this private woman made. Because Zona Gordon was a loner, a creative type who preferred to be in the comforts of her own home, she was included in this exhibition. I had a peek into the life of a woman who wouldn’t let people in. Was her work the result of a compulsive disorder, or merely her lifestyle?

Lastly, the works by Ted Gordon, which seem to be the museum’s prize possession, are included in this presentation. A hint of OCD is credited for Gordon’s ability to generate a prolific and focused body of work, and to the Visionary Museum, this is a seemingly good reason to have this whole exhibition. His drawings of faces made by pressing a ballpoint pen deeply into cheap school grade papers to create a variety of linear patterns could easily be called doodles. In fact, he did consider them doodles, and I agree. Perhaps it was his lifestyle and challenges which gain this extra consideration for doodles, and make them art.
at 11:55 PM

Hi !.
You may , probably very interested to know how one can make real money .
There is no initial capital needed You may commense to receive yields with as small sum of money as 20-100 dollars.

AimTrust is what you need
The firm represents an offshore structure with advanced asset management technologies in production and delivery of pipes for oil and gas.

Its head office is in Panama with structures around the world.
Do you want to become an affluent person?
That`s your chance That`s what you desire!

I feel good, I began to take up real money with the help of this company,
and I invite you to do the same. It`s all about how to choose a proper companion utilizes your money in a right way - that`s it!.
I earn US$2,000 per day, and what I started with was a funny sum of 500 bucks!
It`s easy to start , just click this link http://sowaqewo.kogaryu.com/kyxebic.html
and lucky you`re! Let`s take this option together to become rich