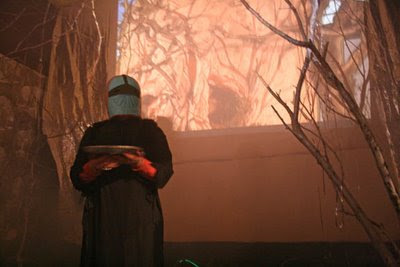 
"What the Hex," indeed. Erin Womack is obviously working alchemy on top of the art game. While entering the installation "Enchanted Forest," you are automatically transported into a distant land that lies somewhere between Sleeps Dopesmoker and Dagobah, the planet system where Yoda claimed residency. Starting with the senses, a heavy cloud of party fog fills your nose as you succumb to the sound of a drone noise looped over and over creating a seance-like atmosphere. With the lights turned down it's hard to understand as the viewer what you are walking into at first, but then your eyes adjust and it's clearly an Enchanted Forest with silver painted birch tree limbs climbing the patterned silver walls and a large video projection of more trees, and most importantly a godlike tree creature lurking from side to side. If this wasn’t enough of a transformation of space, 3 to 4 performers greet you with baskets of dried bean shells and silver rings. It's confusing on how to confront or not confront the performers due to long robed costumes and tree or patterned masks.

On a dry level, the entire installation works a pattern of recognition in which it is an iridescent living forest complete with fog and sound to convey the viewer into another world, as opposed to just looking into one. This entire world-building idea in art is so popular, but I never before felt transformed by a surrounding or felt that my identity as a viewer had been diminished for this greater cause of the installation, which is exactly what I want to feel as a viewer with this type of work.

The only seen problem was the second time I visited, the focus of the performers had died down, but Transmodern Festival lasts for roughly four hours.
The entire installation was a "gift" more than a piece of art that one is supposed to understand on a critical level. "Enchanted Forest" had a theatrical quality to it, making a viewer want to sit and watch as these "tree god" performers lurked good charms to new viewers to the room. When a "tree god" approached me, I took a silver ring.

Basically it boils down to the fact that "Enchanted Forest" is probably the best piece of art I have seen in the past year, hands down. Which brings me to the question: why should the current push of art be for some who would have to have an educated background of study? When a piece works on an entire ethereal backing instead, and relies on wisdom instead of knowledge which one could break down such a piece with knowledge, but this would completely destroy the identity of magic in a work like "Enchanted Forrest."

I recall trying to tell friends about it the next day and my words came out sounding like lies because it's such a strange identity to break down without wanting to tell people "You just should have been there".

For more images from the Transmodern Festival, check out There Were Ten Tigers!!!
at 11:41 PM

I think this raises really good questions: what purpose should art serve?
AND
Who gets to make "art"?

Got it, labeled it!

sorry, i wasn't trying to be a jerk, bonner just told me hed give me photo credit for any of my pix he used

No problem-o. We love you too much to leave you uncredited :)