A Mournful Note from Cory Oberndorfer.

I always hate to be the bearer of bad news, but in the world of popular culture all good things must come to an end. Perhaps you all remember the height of Snoop Dogg's "izzle" talk. First it was clever and funny and unique to Snoop. Then everyone jumped on the bandwagon. Then one day I heard the "izzle" death knoll in the form of Fran Drescher's annoyingly screachy voice in an Old Navy commercial. Don't remember? Here's a remix of that moment.

Unfortunately I must announce the news that another fad is quickly nearing its demise. Graffiti. But before you get too weepy, realize that the graffiti boom has had quite a long run. What we know as modern graffiti raged in the mid to late '80s as artists covered entire New York commuter trains. The graffiti culture has always been tied to subculture movements like hip-hop, punk and skating. Then along came Banksy. In recent years he has been gaining international attention with his guerilla art movement, often armed with only a can of spraypaint, a stencil, and a humorous yet biting message.
But then the suits took notice. People like graffiti. Paint drips = street cred.
Don't believe me? Walk into any Urban Outfitters, a store that quickly eclipsed Hot Topic as the largest offender of retailers selling out a subculture phenomenon. In Urban Outfitters you are sure to find graffiti influence on everything from tennis shoes to t-shirts, but most importantly you will find no fewer than a dozen books on graffiti. For a while I enjoyed the fact that street art was becoming available for public viewing. I was even excited recently to see Vanina Holasek Gallery in New York's Chelsea district presenting a show of Banksy's work. As I stood in the gallery looking at the price list of his work I realized that no matter how it's presented, the rebellious nature of his work was dead to me.
Then, several days later I found an even stronger message that graf is dead. It came in the form of a Rambo movie poster for Stallone's new movie. Yes, the 61 year old actor is cashing in on yet another sequel in the form of John Rambo, gratuitous defender of the oppressed, voice of the little man, and co-opter of hip stencil street art. 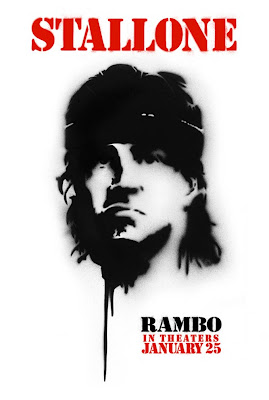 Need more proof? The Sundance Film Festival has long encouraged the voice of the creative artist. In recent years they have branched beyond film to include other sorts of media arts. In January they will be hosting the Graffiti Research Lab as they present L.A.S.E.R. TAG. L.A.S.E.R. Tag is a Weapon of Mass Defacement (WMD) that gives individuals the power to communicate their thoughts on buildings, ski slopes, and snowbanks, using a 60-milliwatt laser and a big-ass projector. The G.R.L. will bomb screenings, party events, and other random targets for the duration of the Festival. I'm sure these hard core subversive street artists weren't lured into the festival by the promise of big money at what is known as the largest and most expensive Hollywood shopping mall. I'm sure their messages and technology won't be exploited to sell the latest vodka or designer underwear. I'm sure they'll "keep it real".