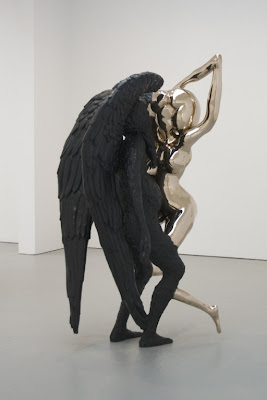 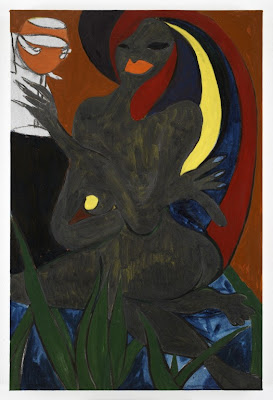 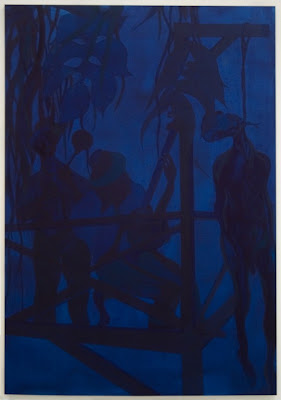 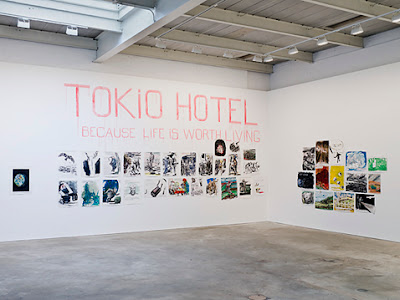 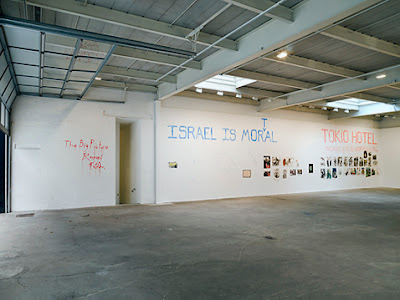 Zwirner’s sibling spaces in Chelsea hosted two very different shows by artists Chris Ofili and Raymond Pettibon this fall. The shows were not only markedly different in comparison to one another; both artists presented new bodies of work that revealed new approaches and new tones.
The first show I saw was Ofili’s, and I was quickly astonished by work. Many of the new paintings are quite beautiful (saleable??). The Turner laureate has long been known for his contemporary takes on the icon; his optically stunning paintings featuring glitter, elephant dung, snippets of porno and other adornments built his reputation in the nineties. For the past few years, it seemed that no change would push the work into a new arena.
Ofili’s current gestural paintings do just that, although it is a more traditionally academic arena than one might have expected. Ofili is in transition here, but the new direction of the work is not entirely clear. Never the less, Ofili should be admired for displaying his work while still in a transitional phase, especially after remaining content with his ‘90s icon paintings for so long. The gallery is full of dozens of canvases that draw unabashedly from the works of modernists such as Matisse. The themes in this show address Ofili’s standard concerns: images of women, race, the notion of icons, and the optics of color. The surfaces of these paintings are spotless as if Ofili didn’t have to work for the mellow color relationships that he finds. The palate seems relaxed and self-consciously “exotic,” and it never becomes jarring or urgent, even in the most grim paintings in the show. These Blue Rider images of lynching and murder are rendered in deep blues, and the viewer must wait for the narrative to emerge from the quiet color. This detachment lends them a sorrowful, elegiac quality.
The rest of the paintings are more lively, but they also become repetitive rather quickly. Ofili combines a pleasant retinal buzz with images of curvaceous, sexualized women. What are we to do with these paintings that deliberately combine visual pleasure with nude women? Ofili’s previous work seemed to be about the objectification of women; his combination of porno, religious icons, and seductive color seemed to take concern with this issue and raise questions about it. In his new work, Ofili’s stance is less obvious. The change in the work blurs the line and I begin to wonder if Ofili himself has become the objectifier.

Predictably, Pettibon’s show has no trace of Ofili’s visual pleasure. The show is entitled “Here’s Your Irony Back (The Big Picture),” and it is one of Pettibon’s most ostensibly political shows yet. It’s also one of the best shows I’ve seen in Chelsea in a long time. The rough, gritty drawings are organized into suites and arranged in a single room as an installation. Enormous captions are written above each group on the wall, wrapping around three sides of the gallery. This show, despite its bite, was far more enjoyable for me. Viewers are asked to migrate through the drawings in a group, and my awareness of myself as a member of the larger audience underscored the political message behind the work. Furthermore, this show drew in a more diverse audience than the Ofili show, which was virtually empty by comparison.
The show is highly political in the best sense of the term. Pettibon is not simply taking righteous, empty shots at this or that politician; he clearly confronts blaring issues in American politics and turns them over the viewer, as if he is asking us to do something about it ourselves.
Each series of drawings addresses a different theme. Beginning with an organized attack on the War on Terror and conflicts in the Middle East, the themes gradually become less focused until, on the final wall, the drawings are organized in a chaotic, free-for-all fashion. The highlight of the show for me was a group of 14 landscape drawings on the far wall of the gallery, which seemed to bring Pettibon’s politics, his graphic sensibilities and skills, and his concern with a bigger picture together in one statement. This was one of the few times I’ve walked into a gallery in Chelsea and actually felt that the show was genuinely connected to something outside the gallery world. Pettibon’s politics and ideas leapt off the page, and I’ve never seen images from this artist that were more exciting or gritty than these.
at 2:49 PM